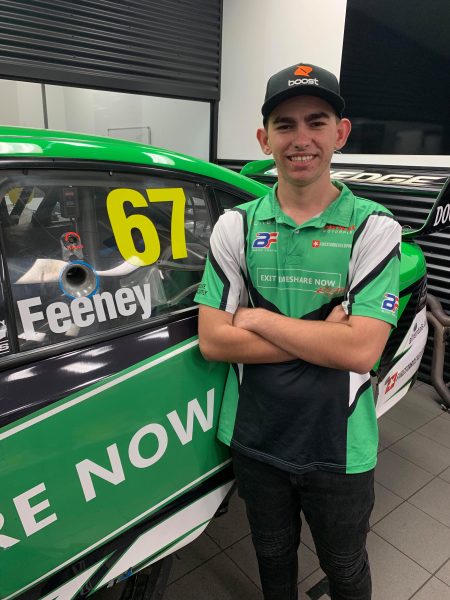 Feeney has excelled through his six years of Karting, form that has carried into hist first year of car racing in the 2019 Super 3 Series. He holds the record for the youngest ever Toyota 86 Racing Series Race Winner achieved when he was just 15, and is the first Australian to ever podium at the Rok World Cup. He has been racing motorbikes since the age of 3, before moving to Karting at 9.

With a Pole, a Win and a Overall Podium at all events this year Broc currently sits first in the Championship as he hunts down the 2019 Kumho Super 3 series.

In Year 11 at school, his passion for motorsport extends to his education, where he is currently completing a school-based apprenticeship as a Mechanic which includes working on his own car that is run by Paul Morris Motorsport and kept onsite.

“Boost Mobile is proud to continue its support of young talent in Australia. We feel that Broc is a great young driver with the world at his feet, and we’ve enjoyed following his journey so far and being a part of it moving forward. We welcome Broc into the Boost Mobile family and wish him all the best for the remainder of the 2019 Super Cars 3 Championship.” said Jason Haynes, General Manager of Boost Mobile Australia.

“As well as being a talented young driver, Broc is also the same as every other 16 year old Aussie who uses a lot of phone data. As he travels across the country racing cars, Boost Mobile is the perfect fit, as we can offer him loads of data on the biggest network in the country.”

Boost Mobile has a strong history of identifying and supporting young Australian talent across a wide range of sports including motorsport, surfing, skating and more, with Feeney excited to join such a stable of talent.

“To have the support of Boost Mobile, at my age, is unbelievable to me. They are known to support the best athletes and it is an honour to be standing alongside other ambassadors throughout racing and all the other sports they support,” said Broc Feeney.

“My dream is to make it to the Virgin Australia Supercars Championship and become Champion there, but also look towards NASCAR in the US. I have the determination, commitment and strong will to win but also appreciate that it takes a team for such dreams to be realised and that is where having the support of Boost Mobile cannot be overstated.”

“Karting taught me so much about racing at an early age, and I follow all things Motorsport, from SuperCars to Formula 1 and MotoGP. I’ve loved every minute of competing locally and internationally against the world’s best. It has shown me that to succeed I need to push the limits every time and leave nothing on the table.”