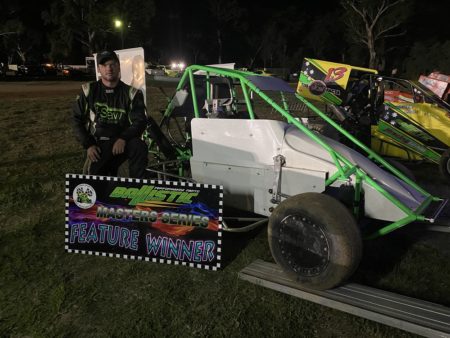 The Victorian Grand Prix Midget Association headed to the north east Victorian border town of Wahgunyah for the latest ‘Ballistic Performance Parts’ series event with eight of the pocket rockets making the trip after some recent spectacular racing including the Australian title. Gun drivers in the line-up included Ash Booker and Chris Fowler, whilst the north east was represented by Goulburn Valley racers David Bacon, Terry Brown and father and son racers Shawn and Jack Ward.

Booker took command of the lead on lap one with Fowler and Shawn Ward (# 44 – Independent – Suzuki GSXR 100 – Benalla Paint Place) following him through the start line to complete lap one. Bacon slowed down on lap two with engine issues and circulated to finish whilst on lap four engine concerns curtail Jack Wards run and he parked infield. Booker led all six laps of the 610 metre on the pole track, eight to nine laps on most other tracks, and took the victory by just .694 of a second in a flag-to-flag opening race. Fowler finished second then Shawn Ward, Blackeby, Kamolins, Brown and Bacon.

Lining up for heat 2, Blackeby led the field to the green flag with Fowler alongside, then Shawn Ward and he was to be joined by Kamolins, Brown, Booker, Bacon (# 36 – Perry Bros – Yamaha R1 – DB Cleaning & Kanga Hire) and Jack Ward completed the dummy grid however wretched luck for Kamolins as his chain came off whilst on his way to the dummy grid and he was unable to get out onto the track.

Fowler made the most of his front row starting position and secured the lead on lap one with Booker and Shawn Ward chasing him. Jack Ward’s night went from bad to worse as he spun on lap three and the car refused to fire up for a restart. Bacon’s car still wasn’t sizzling, and he was lapped on lap four as Fowler went on to win from Booker, Shawn Ward, Blackeby, and Brown (# 88 – Stinger – GSX Suzuki 1100 – Mooroopna Mobile Engineering).

In the final qualifier, Kamolins (# 22 – Independent – Suzuki – GSXR 1100 – St Helena Garden Maintenance), and Jack Ward began from the front with Shawn Ward and Bacon scheduled for the second row then Fowler, Booker, Blackeby and Brown. Bacon did not make it to the dummy grid line-up due to his ongoing issues with his engine and when the green flag dropped Booker raced out to the lead with Fowler and Shawn Ward again in second and third, spots the three drivers had held right through qualifying.

Kamolins chain became a problem again on lap five as it came off leaving the motorcycle powered race car infield without points. Booker won by just over three seconds, the biggest margin of the heat races in a second flag to flag finish of the evening. Fowler (# 13 – HMJ – Yamaha R1 – RMG Signs) came home in second from Shawn Ward, Blackeby, Jack Ward in his first finish of the evening and Brown.

A twelve-lap final was then slated to end the night, a distance of seventeen to eighteen laps at other racetracks. To mix things up, top qualifier Booker and second top Fowler started the feature event half a lap behind the field with lowest points on the front of the field. Jack Ward, Kamolins, Brown, Blackeby and Shawn Ward led the field to the line whilst Bacon’s car was cooked and was loaded up onto the trailer.

Blackeby from row two, led the field on its return to the start line to end lap one with Jack Ward, Shawn Ward, Kamolins and Booker the top five. On lap two after riding over a large on track hole, Kamolins car after launching into the air broke a left rear shocker and exited the racetrack.
By lap four Booker (# 50 – HMJ – Yamaha R1 – Pitstop Mowers) was the new race leader with Blackeby, Fowler, Jack and Shawn Ward the new top five. On lap five it was noticed there was a spring on the racetrack and the officials called a caution flag halt to the race to remove that from the track. It was from Kamolins car when he broke a shocker on lap two, Kamolins also later confirmed his exhaust was broken also. Shawn Ward pulled out of the race at this point due to a brake lock situation.

From the restart Booker continued to lead and Fowler moved into second on lap six. As the two had been in earlier heats, they maintained a close proximity to each other with Blackeby in third then Jack Ward and Brown.

Circulating in the low 21 second bracket both Booker and Fowler moved to almost a complete lap ahead of Blackeby who was in a close dual with Jack Ward. When the chequered flag unfurled, Booker beat Fowler, Blackeby, Ward and Brown at Wahgunyah Speedway.