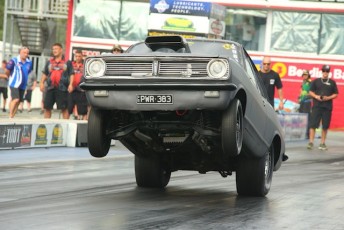 MEDIA RELEASE: Drags – The Australian Pro Street Association and Willowbank Raceway have today announced a new addition to their respective calendars with the creation of an additional round for the 2015 APSA Series to be held at Queensland’s premier drag racing facility on Saturday the 3rd of October.

The Series last visited the Raceway in March for its annual Pro Street Shootout event, which was shaping up to be the fastest and most competitive round in some time before wet weather intervened.

APSA promoter Peter Pisalidis said the new round will be the fourth for the 2015 Series, and include a special bonus prize payout.

“We are really excited for this new round to feature a special bonus prize payout including a ‘one-shot buy-in’ that will allow our competitors to finally settle the score on who has the fastest Radial car in the country,” said Pisalidis.

“This means that any Radial competitors can buy-in to be in the running for a $5,000 prize and the all-important bragging rights of who is the fastest following intense side-by-side racing.

“There is always a lot of conjecture amongst the racers as to who has the goods – this buy-in opportunity will throw down the challenge once and for all so we can see who is prepared to really put it all on the line and who is just all talk.”

“The Pro Street Shootout held here in March is always popular, and so we are really thrilled to be able to host this new round for the APSA Series at our venue,” said Manson.

“Here at the Raceway we host literally hundreds of on-track events across the year, including everything from the largest championship drag racing event held outside of the US – the FUCHS Winternationals (4-7 June) – to theme events focused around the various marques and extreme street events such as the Pro Street Shootout.

“This event is already shaping up to be a truly intense Pro Street battle that is sure to delight racers and fans alike, so we can’t wait to see how the action unfolds here come October.”

All entries for the event will be taken via the Willowbank Raceway website – willowbankraceway.com.au – with full event information and rules to be made available at austprostassc.com.au.