Bonsey’s improvement second to none

Bonsey’s improvement second to none

It’s fair to say that the 2018-19 season has been a memorable one for Kristy Bonsey, whose significant improvement in the 410 Sprintcars class was recognised during last Saturday night’s annual Sprintcars Queensland presentation night, with Bonsey taking out the Most Improved Driver award. 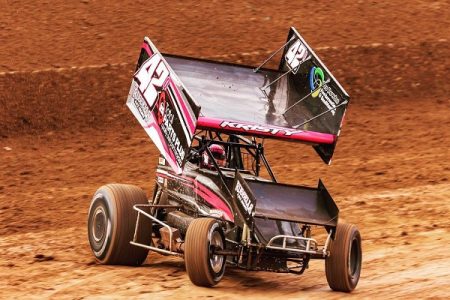 Despite running on a tight budget, Bonsey and her dad Russell, who acts as both crew chief and his daughter’s biggest supporter, were dedicated to finishing inside the top 10 of the East Coast Logistics Series at Brisbane’s Archerfield Speedway this season aboard their Qld # 42 Total Parts Plus supported Eagle car, while contesting a slightly limited campaign.

While proceedings didn’t quite get underway as planned, with Bonsey failing to qualify into her first two feature races, the team rallied to not only qualify for feature races, but move forward through the field to achieve some pleasing results; a fact that was soon realised when Bonsey transferred into the feature race during round three of the series via the B main, going on to drive from position 19 to nine, using her wild card in the process to bank valuable points.

This sparked a new energy within the team, with the 24-year-old qualifying into every future feature race, while also racking up a pair of top-five finishes and numerous top-10s.

It was this newfound consistency that allowed Bonsey and her team to realise their goal of finishing inside the top 10 of the series, exceeding even their own expectations by placing seventh overall, while Bonsey was thrilled to see that her development as a driver had not gone unnoticed as she accepted the Most Improved Driver award.

“We gave ourselves a big goal this season and we were very committed to attainting it, so to be able to accomplish that is a massive achievement for the whole team,” commented the Jimboomba, Qld-based racer.

“On a personal level, I was extremely honoured to receive the Most Improved Driver award, but it’s really an award to share with the team, with all of their hard work and support making it much easier for me to do my job out on track.”

Ahead of the 2019-20 season, Bonsey and her team plan to update their engine. They’re looking forward to utilising the added horsepower during their campaign in order to improve even further on what has been a fantastic season.

Bonsey would like to thank her 2018-19 season sponsors: Total Parts Plus, Russell’s Race Engines, Pro Powder Powdercoating & Sandblasting, and Stroud Homes. Special thanks must go to Bonsey’s dad (Russell), along with pit crew member Ash.