Alexandra Speedway Club has closed out their 19/20 season with its annual 100 Lap Derby taking centre stage and history up for grabs. That is exactly what happened along with Junior Sedan and Standard Saloon records and plenty of lasting memories for all involved. 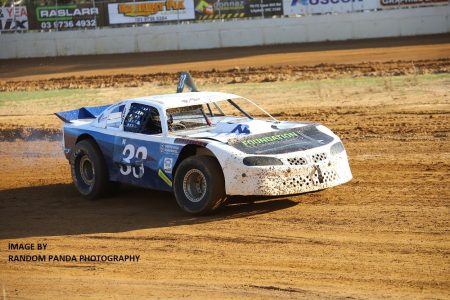 This Foodworks Alexandra 100 Lap Derby ended with a fourth win in succession for Lennie Bonnici after a great tussle with Warrick Taylor in the last forty laps of the event seen Taylor take the lead only for mechanical issues to see him just trying to hang on for second place.

Bonnici was sensational as he did what he does best, he did not throttle his car, he feathered around the track and used its power to weight advantage down the straights to pass cars. He was already an event legend prior to the weekend with his three peat in the record books, now he moves on to four wins in a row.

Qualifying races produced four drivers with three wins out of four races, Damien Miller, Warrick Taylor, Bonnici and Darren Forrest. Miller set a new one lap record for the type of car he competes in a Sports Sedan during the best Open Sedan event anywhere in Australia.

Brad Warren whose also got a Sprintcar history and more recently competes in events where destroying cars in the name of entertainment is his thing, set a six lap record on night one, that record was later broken on the second night by Damien Miller. In Warren’s record race, he beat Lennie Bates by just 0.019 of a second.

The big 100 Lap event began with Miller leading early, he led from lap one from Bonnici, Warren and Forrest on lap one the top ten nine laps later was Miller, Bonnici, Forrest, Warren, Bates, Donegan, Taylor, Fallon whose won four of the Derby’s, Steve Kershaw and Josh Service.

On lap twenty three Miller lost the lead and fell to thirty first after looking so good and doing all the right things. Bonnici moved to the head of the queue with Warren second, Taylor, Donegan, Fallon, Peter Cox, Bates, Dale Smith, Kershaw and Service the top then.

Taylor moved to second by lap thirty five in his Chevrolet LS powered Late Model Sedan and started the chase of the Super Sedan ahead of him powered by the same engine. At the half way mark of the race new to the top ten was Gareth Wilson who recently only hits the track for the short circuit events in his very strong Sports Sedan and Shane O’Brien whose the brother in law of the Bonnici.

With thirty laps to go Taylor took the lead and he started to put distance between he and Bonnici when he had no cars ahead of him and got caught when he found it difficult to get passed others having their own race, before getting away again. Taylor led Bonnici, Warren, Fallon, Donegan, Bates, Dale Smith, Shane O’Brien, David Forrest and the second of the O’Brien brothers Nathan.

Dean Pictor who qualified via the last chance B Main and Lee Beach were new drivers inside the top ten by lap eighty, Taylor’s machine then faltered on lap ninety seven as it lost power trying to get out of the last left hander of the dog leg onto the speedway back straight and Bonnici picked him off to reclaim the lead again.

Those final three laps seen Bonnici move to five seconds ahead as Taylor’s car bogged down each lap at the left hander onto the back straight each lap, Bonnici went on to win from Taylor, Fallon, Warren, Shane and Nathan O’Brien, Pictor, Dale Smith, Andrew Jordan and Beach.

After the event Bonnici was ecstatic “I am speechless, to win four in a row, who would believe it. I really feel sorry for Taylor, once he had the lead I thought that was it, his time will come again, I am sure of it. For me and my family, we had a terrific night, all three of our cars in the top ten results. Wow. Thank you to everybody for the congratulations and the support, what a terrific weekend.”

The Auscon Projects Victorian Short Circuit Championship was the finally chance for drivers such as Todd Moule the current Victorian Champion, Courtney Meakins and Kasey Garlick to compete in the category before moving into senior age racing.

Garlick in particular has had so many wins at Alexandra over the last two and a half seasons and Moule has been in tremendous form since Christmas winning his Victorian title in this time frame.

In qualifying Rhys Meakins set a new one lap record through the short circuit almost breaking into the 34 second bracket in his round one win on night one. He finished just .436 of a second ahead of Moule in the race and his time of 34.086 for one circulation was only 0.001 faster than Moule, n the same race.

In the fourth round heats, Moule then set the Junior Sedan world abuzz when he set a 34.997 second lap in his last round win. Moule and siblings Rhys and Courtney Meakins at this point had all been faster than the previous record before the weekend began. The one lap record would again be broken by Moule in the fourth and final round when he clocked 34.525, a second faster than the previous record.

Both Courtney Meakins and Moule won three of their four qualifiers on the way to a front row start in the main event. Moule set a new six lap record in the last round of qualifying.

Moule went straight to the front when the green flag unfurled. Courtney and Rhys followed with Garlick moving into fourth early on in the race. Garlick picked off Rhys Meakins and started to apply pressure to Courtney. Moule set record after record for one lap times a 34.513, then a 34.470 and then finally on the last completed lap a 34.242.

The race ended declared after Garlick had just got ahead of Courtney Meakins before the two switched out of the right hander and they touched in the dog leg and Garlick rolled the car over. She was uninjured and with Meakins being deemed to have caused the incident, Garlick was awarded second place as Meakins was sent to the rear of the field for her result.

The Auscon Projects Standard Saloon Cup race meeting had attracted some of the best Standard Saloon competitors for the annual short circuit experience on Queens Birthday weekend and they produced some close races, some new records and a victory to a host club member topping off the show.

In qualifying Neil Ingram and Warrick Howie were the dominant competitors with Ingram winning his first three qualifiers and Howie is last three to put them both off the front row of the grid for the final.

Rhys Lansdown had his first ever senior event qualifying win and was involved in the closest race finish, finishing second behind Howie by just0.018 of a second, Blencowe had two second place finishes by less than a second before taking a win himself.

Jacob Vuillermin set a new six lap record for the category and a one lap record in the same race in the lead up to the feature event in the final round of qualifying. He recorded a one lap circuit at 34.991, the first ever in the class below the 35 second mark.

Howie, Ingram, Lansdown, Vuillermin, Blencowe, Colin Ward, Chris Miles, Shane Belk, Leigh Mitchell and Mark Miles lined up as the top ten on the feature race grid. Howie at the drop of the green flag moved straight to the front. Ingram dropped back a little in the field getting a little off line early and then suffered some mechanical issues, his great weekend finished at that point.

Lansdown had a run in second. On lap eight Lansdown run came undone and he slid back through the pack to thirteenth. On the final lap with the threat of rain coming, Howie had a moment in the entry to the dog leg where he was slightly loose with Vuillermin on his tail. There was contact and with Howie in the lead position of the race, Vuillermin was deemed to have off-loaded Howie and was sent to the rear of the results.

The official results finished with Howie in front of a fast finishing Mark Miles, Blencowe, Brennan who came from fifteenth on the starting grid to fourth, Chris Miles, Ward, Mitchell, Belk and Mark Borkowski.