Bonnici and Miles back to back at Alexandra and Garlick wins too!

Bonnici and Miles back to back at Alexandra and Garlick wins too! 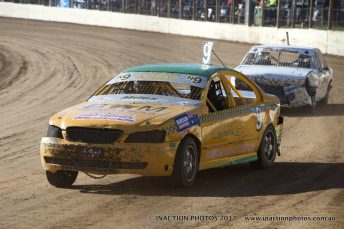 Lennie Bonnici has won the prestigious Campton Graphics 100 Lap Derby at Alexandra Speedway for the second year in succession when he lead to the finish line the only other driver on the lead lap Brad Warren, who also finished second for the successive year. Mark Miles won the Shamrock Cup for the third year running whilst Kasey Garlick won the Victorian Short Circuit Championship for Juniors.

Around seventy competitors entered the qualifying for the 100 Lap Derby where only forty get to start the main event, lots of hard luck along the way put some competitors out of contention that should have been in the feature event and others were out early in the feature itself.

The weekend seen lap records crashing race after race in all the categories, however noticeably more in the 100 Lap Derby where the record tumbled form 32.5 prior to the weekend to 31.4 by the time it finished. This time for knowledgeable pundits of the sport, is just simply astonishing given that it wasn’t long ago the exact same course took 38 seconds at a minimum to complete.

Tom McKenna got rolled over in the dog leg portion of the course and he finished up out of the race before lap fifteen after a number of financial supporters brought his way into the feature with a contribution to the Crash Crew along with Jake Blencowe who went on to finish strongly.

Bonnici with a LS1 powered Chassis car resembling a Super Sedan from the early 2000s had a battle with Corey Lincoln, Damien Miller and top qualifier for the feature Brad Warren early in the fastest portion of the race up to around lap fifty, before Lincoln then Miller dropped out of the race and Bonnici and Warren continued the battle.

The lead kept extending as they worked through traffic with Bonnici going on to win by 23 seconds which is over 3/4s of a lap from Warren, Andrew Jordan, Steve Kershaw, Dales Smith, Tim McPherson, Robert Haisma, Jake Blencowe, Warrick Howie and Jeff Blencowe all having completed at least ninety laps.

During qualifying Warrick Taylor running a chassis car with a LS1 Methanol fuelled and carburetted engine set the outstanding fastest ever lap of 31.440 seconds on a circulation of the Dog Leg circuit. In fact the record was broken a number of times before Taylor recorded his time on day two, others to have broken the previous record included, Bonnici more than once, Tony Moule, Brendan Miller and Fallon.

Troy Tatterson had a massive rollover bouncing off the banking in the dog leg entry with flying height unknown, possibly thirty feet in the air as he bounced up and down six times.

Thirteen of the thirty qualifying races were decided by a margin less than a second. Bonnici set a fastest six lap qualifying time of 3 minutes 14.804 in the second last heat of qualifying whilst in his race earlier on the night he won by the smallest margin over the weekend by just .062 of a second just pipping Brendan Miller.

Mark Miles from Pakenham won his third Shamrock Cup in succession supported by the local Shamrock Hotel when he defeated local hope Nick Chrystie to the finish by over three seconds. Miles consistently put down floorless laps, hitting his marks each and every time to keep a safe distance away from everything going on behind him.

The battle for second to fifth was race long, with Aaron Price, Cameron Dike and Mitch Blencowe giving Chrystie a hard time. Neil Ingram who had earlier qualified well was one of the unfortunates who didn’t finish the race along with Garry Charles, Simon Strang and Ben Hutchinson who had a horrible weekend.

In qualifying races, Miles also set a new Standard Saloon Short Course record recording 35.705 as a best lap. Miles also won the fastest heat race of the night in the very last when he recorded a 3 minute 37.871 result.

When the chequered flag unfurled after a race incident between Chrystie and Blencowe seen Chrystie come to a stop, Miles had the win over Chrystie, Price, Dike and then Blencowe who was penalised two places for that Chrystie incident then came Greg Parks, Mitch Bowyer, Shannon Meakins, Tim Hutchinson and the Arron Laidlaw/Kane Gibson combination. Bailey Perkins finished his first ever adult feature in front of Adam Barkby and Corey Horter.

In the Junior Victorian Short Circuit Championship competition Lilydale racer Kasey Garlick proved too strong for the field of eighteen starters in the twenty lap final. Both Ricky Cornwall and Tim Gorski tried to compete with her, however she just found spurts of speed every time she needed too. Jack Ramsdale was also a strong competitor in the final whilst Jade Moule who most likely would have been in the battle to win, didn’t get to start.

Garlick at the finish won the race by under a second from Cornwall, Gorski, Ramsdale, Caleb Lincoln, Ayden Bellman, Jamie Burton, Ally Morrison, Tyler Barton, Nicolas Cherry and Rhys Meakins all on the lead lap and Chloe Sheerman a little further back.

Earlier in qualifying Tim Gorski become the fastest ever Junior around the course with a new record time of 35.882 whilst Cornwall and Garlick can feel unlucky as they also beat the old record. Courtney Meakins won the fastest heat of the weekend with a time of 3 minutes 46.632 seconds.