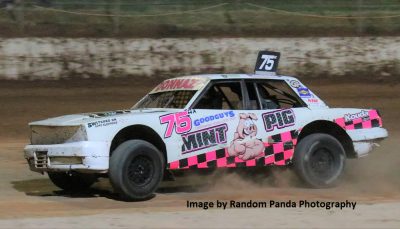 This Saturday from 4.30pm at Nyora Raceway motorsport fans will see the annual all in Open Sedan Blue Ribbon event the Bob Hickson Memorial close out the local dirt track season, with forty plus driver nominations received from around Victoria keen to take home the coveted event, also headlining the show is the very popular Crash and Bash and fans are sure to see a fantastic show from them with Junior Sedans also part of the entertainment.

In this race it is very hard to pick a winner, luck is needed along with patience and securing a top of the field starting position during qualifying to try and assist with navigating traffic early in the fifty lap feature event are all elements required to go the right way to potentially be a winner.

Crash and Bash always bring the action with them, the fans just love them. Cars will hit the walls and each other, cars might roll over, wheels might come off and panels may be ripped off the cars and at the end one driver will stand tall as the winner. Jake Young, Rob Bushell, Dale Morrison, Rob Disher, Nathan Taylor, James Kane and Shannon Mair are some of the loonies in this field that will have you looking for that action.

Junior Standard Saloon competition will see Rhys Lansdown and Lewis Williams battle again with a great mix of experienced and new competitors in the line-up. Kacey and Damon Ingram bring experience to the line up whilst Maddison Miles is one of the new ready to have some fun.

The Speedway Sedans Australia Junior field has over a dozen eager competitors. Ally Morrison, Courtney Meakins, Rhys Meakins, Linken Paterson and Logan Mair are some of the quicker entrants in the line-up to watch as quick little 1200 to 1500cc cars get around Nyora Raceway.