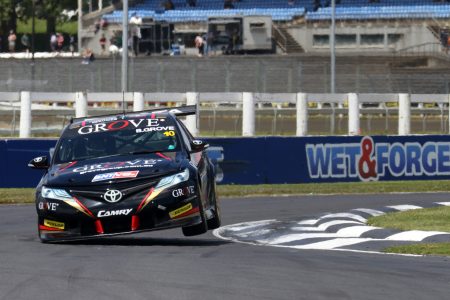 As the Dunlop Super2 Championship season start approaches in March at Adelaide, young Australian driver Brenton Grove has been clocking up the V8 miles in New Zealand.

The Dunlop Super2 Championship is the second tier V8 series in Australia under the Virgin Australia Supercars Championship. Grove is one of three Australian’s competing in the BNT V8s this season, alongside fellow Dunlop Super2 racer Jack Smith who leads the championship, with veteran Scott Taylor also lining up on the grid.

Smith who is in his second season of the BNT V8s, currently leads the championship with Grove lying in fourth place. Despite not claiming a win, but coming close with a trio of second placing’s at Teretonga last month, Grove says a win isn’t too far away.

“We’ve had some bad luck this season. I think that based on raw speed, the Holden is still a fair bit quicker than the Toyota, but as we saw at Teretonga last month, if Jack has a bad race, we can definitely fight with everyone else,” said Grove.

Grove’s sole reason for competing in the BNT V8s, is to gain valuable race miles to help prepare him for the upcoming 2019 Dunlop Super2 season in Australia, as Grove says, while some of his competitors are sitting on the couch.

“Some of the other guys are probably sitting on the couch watching what we are doing over here, so I’m really fortunate to be over here in a car and continuing to learn. Whether it’s a new tyre run, starts, racing, just anything really. It’s definitely going to help me this year.”

Grove will be lining up with Triple Eight Race engineering this coming season in Australia, arguably the most successful team in the Supercars Championship.

“Triple Eight is going to be a massive step up for my career and the way I need to operate. So hopefully by being over here I am able to prepare myself a little better to ensure I can take full advantage of their resources.”

Grove is also mindful that during his off-season training here in New Zealand, Triple Eight team owner Roland Dane has probably been following his progress closely.

“Roland watches everything, so I’m sure he’s been keeping an eye on what’s happening over here. I’ve talked to some of the guys at the 888 workshop and they’ve been interested in what’s going on over here.

“I’m not under any illusions that he’s not watching!”

Round five of the BNT V8s Championship gets underway at Manfeild, Feb 8-10.