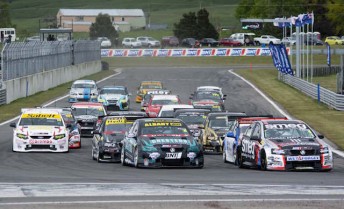 After a successful opening round at Taupo last month, the BNT NZ Touring Cars hit the track again this weekend as the main support act for the V8 Supercars at the Pukekohe ITM500.

The opening round of the championship at Taupo saw three hard fought races and three different winners for the weekend. With wins going to Jason Bargwanna in his Team Richards Toyota Camry, Simon Evans in the Smeg Holden Commodore, and Craig Baird in the Team Kiwi Holden.

Category Co-ordinator Gary Lathrope says the series is thrilled with how the newly formed championship played out at Taupo.

“There were a lot of questions about parity prior to round one, however we were pleased with just how close the cars were. The cars in class one, the V8supertourer specs cars and the TLX spec cars were a lot closer than everyone thought.”

“Having the class one cars on the same Dunlop tyre certainly helped and brought the different specification cars closer together.”

The new category structure see’s V8 SuperTourer (V8ST) and TLX spec cars competing in class one and TL spec cars in class two but all on the same grid and has been heralded as a new direction for premier motorsport in New Zealand.

“There is great camaraderie and a willingness by all teams and drivers to make this series be successful. We feel we are on the right path to move forward.”

The championship points table see’s current NZV8 champion Jason Bargwanna in the lead, with current V8 SuperTourer champion Simon Evans in second place after one round.

For Evans of Smeg Racing, who scored a race win at Taupo, the racing at the front couldn’t have been better.

Evans, who initially struggled at Taupo last month in the early practice session, says he is looking forward to racing on his home track of Pukekohe.

“We didn’t do any testing on the new Dunlop tyre before we went to Taupo so we knew it was always going to be a little hit and miss at some point. We tried things that worked and then didn’t work. It’s just understanding the tyre at the moment,” says Evans.

“I love Pukekohe as a track and now with one meeting under our belt on the Dunlop tyre we are going in with a lot better understanding of what we need to do to extract the best speed out of the car.”

Championship leader Jason Bargwanna says that like Evans he also loves the Pukekohe circuit and is excited for the weekend of racing ahead.

“I love it. It’s a drivers track and it’s my kind of place!” says the exuberant Bargwanna.

“Pukekohe is the sort of track that drivers love and the type of race track that gets your attention. The approach and run over the hill in front of the crowd in 4th gear right on the edge of grip is something that stands out in your whole season and something they don’t even come close to allowing in new track design.”

“The Team Richards Toyota Camry is a gun around this place and has a great balance in both high speed and direction change. The question is, will it be enough? We want the championship this year and we will have our work cut out.”

In class two, the grid will expand with four extra cars for the weekend with the addition of Liam MacDonald, Bruce Verdon, Nathan Pilcher and Bronson Porter. All chasing class two leader, Kevin Williams who scored two race wins at Taupo.

Fresh from his debut win in class two is Wellington driver Brock Cooley, who sits second in points. At Taupo he took two second place finishes in his Speedy Signs Falcon before breaking through for his debut win in the final race.

Cooley is eager to get back behind the wheel at New Zealand’s biggest motor race event at Pukekohe.

“I am excited to get back to Pukekohe, we had the fastest lap in two of three races there last year.”

Another reason for optimism is the return of the team’s engineer.

“We also have our engineer, John McIntyre, back which will keep me and my crew on top of our game.”

McIntyre is one of the icons of Touring Car racing in New Zealand having won the NZV8’s title three times along with many other achievements in the sport.

The BNT NZ Touring Cars hit the track this weekend at Pukekohe for Round 2 of the championship, the V8 Supercar ITM500.