Over 60 of the TL specification cars were built to compete in what was then the NZV8 championship, and category manager Gary Lathrope says the vast majority of these cars are still able to compete in the NZ Touring Car championship’s class two.

“We estimate there are probably around 30+ cars out there currently ready to race. They are good race cars, affordable to buy or lease should a driver wish,” says Lathrope.

“The BNT NZ Touring Car class two championship is a very cost effective yet high level class to get involved with. There are championship rounds throughout the country, and add to that a delayed broadcast television package, it makes it attractive to sponsors.”

Lathrope says that a lot of drivers would be surprised at the relatively low running costs for a class two car. Winton based driver Nathan Pilcher recently entered the championship at round two for the Pukekohe ITM 500 event and says the class is the perfect platform for drivers like himself to learn their V8 racing craft.

“It is a great class to get your name out there and also race with big names like Craig Baird and Jason Bargwanna. It’s also very affordable to buy or lease these cars and get out on the track,” says Pilcher.

“I have always admired the NZ Touring Car championship and being able to race in a series that is so closely contested is great. This is the class that some of New Zealand’s biggest motorsport stars have started from.”

“Our car was built and run by Nick Ross and his team. We have owned it for a year now and this is our second season.”

“Our running costs are around $7000-$10,000 per meeting depending on where we are racing. The South Island rounds work out cheaper for us with less travel and friends and family helping out with accommodation.” 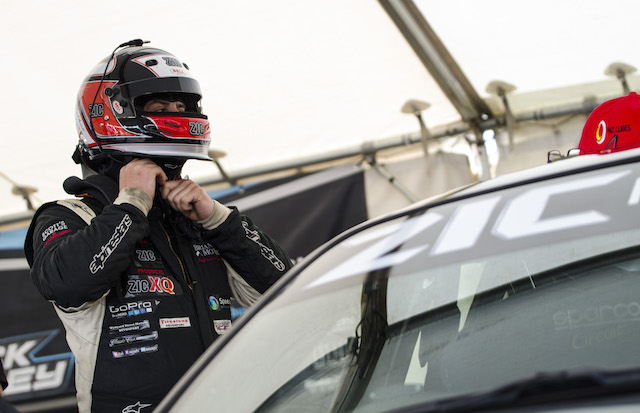 Nathan Pilcher prepares prior to a race at Pukekohe recently. pic: Matthew Hansen

Another young driver competing in the class two championship is Liam MacDonald of Invercargill who also raced at the Pukekohe round a few weeks ago.

MacDonald was pleased with how his weekend went in his ex Angus Fogg and championship winning Ford Falcon.

“Apart a few mechanical problems on the Friday and Saturday I went on to be competitive in race three to come away with 3rd Overall. It was a great weekend catching up with the other drivers and Pukekohe turned on some great weather which made the conditions good,” says MacDonald.

A number of years watching from the sidelines motivated the young racer to get involved himself.

“I spent a few years tagging along with the GT Radial crew and helping out Dean Perkins when he was racing both in Invercargill and Pukekohe so I was very familiar with the NZV8 racing series. My family has always been involved in Motorsport and three years ago we bought a car and went racing.”

“The cars are affordable and the more out on the track makes for exciting racing.

Costs are determined by general maintenance throughout the year but to attend Pukekohe from Invercargill for the latest round our costs were $10,000.”

Another young racer, 24-year old Brock Cooley from Wellington, currently sits third in the class two championship and says the class is the perfect platform for young drivers. Having competed in the SS2000 class and NZ GT championship in the past, Cooley now finds himself in the NZ Touring Cars.

“I have always wanted to race the best drivers in the best cars I could afford and this class has fit the bill perfectly for me. The best thing with this class is you can spend as little as you want once you have paid your usual entry fee and fuel bill. But with the exposure you get in this class, it makes it a lot easier than other categories to get sponsorship to subsidise it.

“It’s a great class for younger drivers, especially when you have a good bench mark like championship leader, Kevin Williams, and you get to race in cars that are relevant to the next touring cars classes.”

The next round of the BNT NZ Touring Cars Championship is at Hampton Downs from November 28-29.