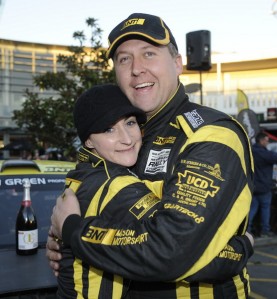 The Masterton Flyers now hold a massive 68 point lead at the halfway mark in the championship, a lead which is so large that there are only 4 other drivers left – of the 30 registered – who still have a mathematical chance of taking the title.

So as the NZRC returns to the North Island for the three remaining rounds where a maximum 90 points are on offer, the Masons need just 16 of those 90 to achieve their goal of winning a record 5th New Zealand Rally Championship.

A third pIace at Wairarapa and 5th fastest through the event’s Power Stage would be enough to shut out the opposition with two rounds to spare – yet another NZRC record for New Zealand’s leading rallying couple.

It would therefore be quite reasonable to expect the Masons to ease their pace and cruise through the 9 stage, 163km rally to ensure those placings are achieved.

“There’s no doubt we go to every rally wanting to win,” said Richard.

“And even though our awesome start to the season means we are within touching distance of taking out our 5th [NZRC] title, there would be nothing better than winning the championship by winning our home rally – for the 8th time – in front of all our family, friends and supporters.”

“Likewise, Sara is only one round win away from equalling Bob Haldane’s record for [NZRC] Co-drivers of 24, and no-one has ever won the championship with a clean sweep, so that would be rather cool..”

Following the ever popular BNT Mason Motorsport Colouring Competition and the Rally Welcome – including the Start Order Draw for the Top Five – at the Copthorne Solway Park Resort and Hotel at 6pm on Friday evening, the 70 car field will start from the Tui Brewery HQ at Mangatainoka from 7am.

They then head to the 9 classic high speed special stages around Pongaroa, Castle Hill, and Masterton, before the finish back at Solway Park from 5pm.

BNT Mason Motorsport are very proud to again have the support of BNT, Dunlop, B.W.O’Brien, ScottSpeed Performance Engines, Geartech, MCA Suspension, Hopper Construction, Race Brakes, Randall & Associates, Quality Foods and Tom’s Autos, without whose invaluable assistance they would not be able to be celebrating a decade at the top of NZ rallying.