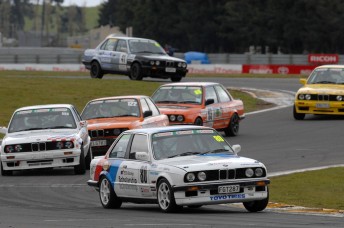 The weekend’s second round of the 2014-2015 Castrol BMW Race Driver Series provided the bulk of race action for the supported NZ SuperTourer event held at Taupo’s Motorsport Park.

Featuring 72 drivers spread across the three competition categories the camaraderie of competition again saw a variety of winners. Each category contested three races of eight laps each around the 3.3km circuit – incident free.

Instead the biggest hurdle competitors faced was again the weather. The fickle spring conditions varied from Saturday’s temperate climate through to squally rain and blustery winds on the Sunday.

BMW E30 category – 36 car field: Split in to two sub groups the E30 category continued its opening round fervour between #1 Marty Irvine and everyone else.

Fastest in overall qualifying the weekend’s first race held on the Saturday was an elementary victory for the Auckland racer. Closest to the #1 car was Wellington’s John Thompson, finishing 3.6seconds behind for second spot while Royce Rollinson finished third.

The second race – held late on the Saturday, featured a handicap start. From 17th position Irvine had worked his way to the front by the seventh lap, with Bruce Miller and Laurie Griffen trailing behind. A fall from grace by pole sitter Ian Hogson on the first lap saw him drop back to 16th position, eventually recovering a couple of spots to take the chequered flag in 14th spot.

In the weekend’s final race, held just before the Sunday lunch break, Irvine did all he needed to stay clear of anyone intending on passing him for first place. Calmly controlling the pace as the challengers came within a pressuring opportunity, the continual weather fluctuations kept the chasing pack on the back-foot.

Starting from third Oxton got past Matt Griffen half-way through the race, leaving him in the clutches of a chasing Reid Harker and Royce Rollinson for the remaining podium position.

By then Irvine had enlarged his leading margin, leaving the rest of the field to scrap for the left-overs. The battle between Harker and Rollinson took the heat away from Oxton, who finished a comfortable second, Harker in third and Rollinson rueing the missed podium.

BMW Open category (A+B) – 17 car field: Putting the niggles of the opening round behind him Dan Slater topped the time sheets to start the first of the weekend’s races from pole.

The E34 racer had a fight on his hands in the opening race when Auckland’s Rob Berggren snatched the lead on the opening lap. Returning serve on the following lap Slater kept a slight advantage – taking the chequered flag first with Berggren 0.4sec behind and Andre Mortimer in a distant third.

The weekend’s second race, held late Sunday morning, was a mixed bag with the weather playing a real factor for the handicapped start race. Hamilton’s Justin Daly started from pole while Te Puke’s David Stephens got the opportunity to start alongside.

Daly did a superb job of keeping the challengers at bay but on the final lap was overtaken by Tauranga’s Graeme Fraser. Having worked his way through from eighth position Fraser got to the chequered flag first – heading Daly by 4.4seconds while Nik Haden finished in third.

In the weekend’s final it was an appearance by Kapiti’s Aaron Harris that added to the variety in the winner’s circle. Dominant in the opening round he started from pole for the slightly shortened afternoon race.

From third on the grid Slater swathed past Barry Kirk-Burrnand and Harris to snatch the lead by the second lap. Harris then made a passing move stick on the fifth lap to regain the lead – a position he held to the finish. Slater finished second, 6.6seconds behind with Kirk-Burrnand third.

Seddon didn’t let starting from the outside position hamper his chance of leading the racing – shooting to the front on the opening lap of the first race and winning by a significant 15.9seconds. Second was Ball with Andrew Walker third – a mirror of their starting positions.

In the second race, and with a handicap start, Kevin Yule got to front the race action until Raewyn Anderson muscled through at the half-way mark. Peter Ball (the father of Graham) then grabbed the lead having worked his way through from 15th position. Ball junior finished second with Andrew Walker in third.

The third and final race, held early Sunday afternoon in cold blustery and wet conditions, was a battle between the regular front-running three.

Starting from second, Peter Ball fought to hold Walker at bay, losing the spot on the second lap. He managed to recapture the position on the fifth lap but Walker’s pressure proved too much – sneaking through on the final lap to push Ball back to third.

The series now heads to Manawatu’s Manfeild circuit for the MG meeting 14-16 November – the third of six rounds for the season title.