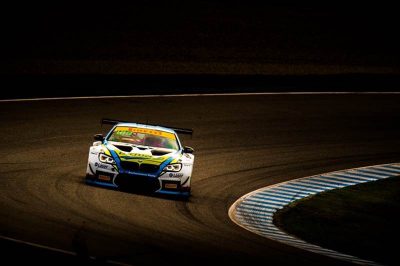 BMW Team SRM will head into the final round of the Australian Endurance Championship (AEC) as a genuine title contender, thanks to Steve Richards and Michael Almond’s deserved second place at the Phillip Island 101.

It was a dramatic day of racing at Phillip Island, the BMW Team SRM M6 GT3 ending up on the podium – and only four seconds off victory – despite two red flag stoppages compromising the team’s pit strategy.

Almond started the race in the car, running second for the majority of the opening stint before making the first of three compulsory stops on Lap 19, dropping outside the Top 10.

From there he put in an almighty second stint to bring the car right into contention, filtering back to 10th as other cars pitted before pulling off a number of solid passing moves on his way into to fourth place.

A pair of red flag race stoppages occurred due to crashes, making for a chaotic transition, Richards taking over the car during the single lap of green flag running between the two stoppages.

When the race finally recommenced for good there were only 40 minutes of race time remaining; less than ideal for the SRM crew with a compulsory stop still to come.

Despite a longer compulsory stop time Richards was able to claw his way back to second place in the closing stages.

While Richards and Almond ultimately fell four seconds short of a sensational win, finishing second at Phillip Island brought a strong points haul to add to the pairing’s third place at The Bend. This sets up an intriguing finale, as BME Team SRM heads into the Australian Endurance Championship finale with the legitimate aim of taking the title.

“We’ve never had tyre life like that before, which shows the gains we’re making with the car,” said Richards. “We’ve worked hard and we’re now seeing it pay off.

“Michael did an excellent job; you can’t get a result without having two fast drivers. It does mean we lose out around the pitstops as we have a longer compulsory stop time, but we can make it up because we have a fast car. To finish within five seconds of the winners is a great result, especially when you factor in the pitstop time difference.

“We smashed it all day with our stops, the team did a ripper job. I’m so proud of what we achieved here,” Richards concluded.

Almond was equally delighted with the result, and left buzzing after that impressive drive early in the race.

“I felt so comfortable in the car after the second stop,” said Almond.

“I just crept up on it. I had the guys on the radio coaching me, keeping me calm, and letting me know where I was so I could be measured in my approach. It was awesome, I had a great time.

“It’s been a privilege to drive with Steve and BMW Team SRM. I can’t wait for the next one,” he said.

The results put the combined Richards/Almond partnership in second place in the AEC reckoning, with Richards additionally sitting third in the overall Australian GT Championship.

The Australian GT season continues in August with a sprint round at Sydney Motorsport Park, before the Australian Endurance Championship finale in October, held at Hampton Downs in New Zealand.