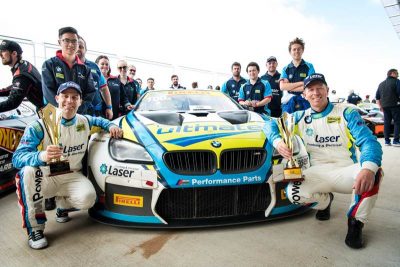 Michael Almond will return to BMW Team SRM to partner Steve Richards at this weekend’s fourth round of the Australian GT Championship, held at Phillip Island.

The Carrera Cup regular enjoyed a sensational debut in the SRM BMW M6 GT3 at The Bend back in April, teaming with Richards to claim the team’s first podium with a well-earned third place.

Almond now returns to the squad for the second long-distance round of the season, partnering Richards for the 101-lap endurance round at Phillip Island.

“I’m really excited to be joining BMW Team SRM again,” said Almond. “Sharing a car with Steve Richards is such an exciting thing to do anyway, and heading into my second weekend in the car I feel so much more familiar and comfortable.

“The car is going better than ever and it loves mid-to-high-speed corners, which is a feature of Phillip Island. The track is fresh in my head as well; I was racing ‘Cup Car’ there just a few weeks ago.

“I got on really well with the team at The Bend and the guys were so easy to work with, so I think we’re setting ourselves up for a good weekend at Phillip Island.

“We also have a championship to think about. It’s really exciting to be in the hunt for the long-distance title, and if we can get execute well this weekend and get a result then we can set ourselves up for the final round in New Zealand later in the year.”

Richards, meanwhile, says he’s thrilled to have Almond back in the squad after the pair made such a successful debut together at The Bend.

“It’s great continuity, and Michael did such a fantastic job at The Bend,” said Richards.

“He has a lot of experience at Phillip Island in Carrera Cup, so I think it’s as good a combination as we could have for this race.

“The great thing is that this time around Michael has some experience with the car. We won’t be going over the nuances that you need to go over when you’re driving a car for the first time. Michael knows the track, he knows the car now, so it’ll be a case of a quick refresher and off he goes.

“Teaming up again also gives Michael and myself the opportunity to fight for the Australian Endurance Championship title. We gained a good haul of points thanks to that result at The Bend, so it’s great to be able to continue that and see what we can do.”

Almond and Richards head into the Phillip Island weekend locked in third place in the Australian Endurance Championship standings, while Richards is also equal eighth in the outright Australian GT standings.

Track action kicks off with practice at 2:20pm local time this Friday.