BMW race car up for grabs in scholarship quest

BMW race car up for grabs in scholarship quest 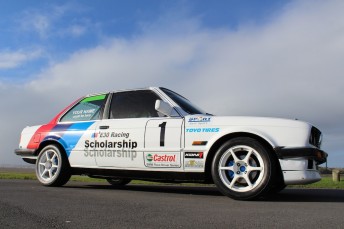 Appealing to aspiring race drivers the winning applicant will receive a package including a race ready BMW E30 2.0L to contest the six round North Island based series.

Applicants will be put through a myriad of tests on 30 August from fitness to motorsport knowledge.

Being held at the Hampton Downs motor race circuit, judging also includes how compelling their CV sells their chance of becoming a finalist.

The remaining group are then put through their paces by BMW driving instructor and motor race champion Mike Eady, with the winner announced that day.

“This is an opportunity quite unlike many other scholarship offerings where it is open to all ages and abilities.

“But as a judge one of the key criteria I’m looking for is passion.

“BMW is all about the passion of its cars, of the sport and enjoying the journey.

“The person that exudes that enthusiasm and craves being in that environment is going to do well – in everything they attempt,” says Eady.

“Another key aspect is the one-make series factor – where it is driver ability that comes to the fore over horsepower or technology.

“It shows who the drivers are – so if you can win races against such a large line-up you’re held as someone with significant ability.

“Overall we’re looking for someone who can finish a race and regardless of where they place, say they’ve had fun and it was the best way to spend a weekend. It is an amateur sport and we do it for the enjoyment.”

Along with the car the scholarship package includes a set of race tyres, brakes, entry fees paid, a race weekend engineer for each competition round along with a maintenance package and lubricant supplies from series backer Castrol.

Competitors run to a code of ‘culture, behaviour and discipline’ to instill a level of competition balanced by camaraderie.

While prior driving experience isn’t necessary Eady says those who have racecraft will find the driver testing easier: “I can see the winner come from some kind of motorsport background.

“The driver who can find the racing line and shines with a smooth calm driving technique will always have the speed come to them over the person who drives flat-out and is erratic.

‘Plus I’ll be testing for feedback on how they thought they went – a key factor to working with any team or engineer. Regardless of their speed, if they can provide meaningful feedback they can always move forward.”

Entries close on 27 August and are open to anyone that hasn’t previously contested the BMW E30 category.

Application details and further information can be found on the www.bmwraceseries.co.nzwebsite in the ‘E30 Scholarship Car’ tab.