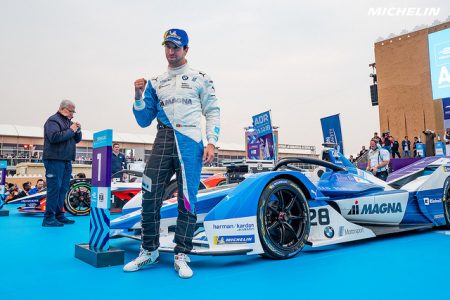 Round 1 of the 2018/2019 Formula E Championship in Diriyah, Saudi Arabia, was won by Antonio Felix da Costa. The Portuguese BMW i Andretti Motorsport driver was joined on the podium by Jean-Eric Vergne (DS Techeetah/Michelin) and Jérôme d’Ambrosio (Mahindra Racing/Michelin).

Heavy showers forced the organisers to modify the morning’s free practice and qualifying timetable, but da Costa kept his head to score his first pole position in the BMW iFE 18 which, like all the cars, was equipped with the brand new Michelin Pilot Sport.

For its debut, Michelin’s latest-generation Formula E tyre faced an exceptionally broad spectrum of conditions which ranged from extremely wet in qualifying to a drying and dusty track for the race itself.

The Michelin Pilot Sport rose to the challenge in style, though, to showcase its exceptional versatility, performance and longevity from start to finish of the championship’s very first 45-minute race, a new format which no longer includes mid-race car swaps.

The two DS Techeetah drivers were then handed a drive-through penalty, however, allowing da Costa to recover the lead which he defended to the flag, unfazed by a late safety-car interruption prompted by a suspension problem on the Penske EV-3/Michelin of podium challenger José-Maria Lopez.

Da Costa went on to pocket his second E-Prix win and BMW i Andretti Motorsport/Michelin’s first in the all-electric championship, while Vergne passed d’Ambrosio (Mahindra Racing) in the dying moments to grab second spot.

After starting 12th and 18th on the grid, Audi Sport Abt Schaeffler/Michelin’s Daniel Abt and Lucas di Grassi ended up eighth and ninth, with the first ever Formula E champ Nelson Piquet Jr (Panasonic Jaguar Racing/Michelin) rounding out the afternoon’s top 10.

The second round of Formula E’s Season 5 will take teams to Marrakech, Morocco, on January 12.