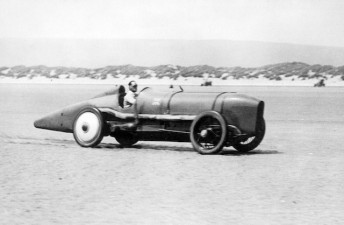 The 350bhp Sunbeam with Malcolm Campbell at the wheel at Pendine

Ninety years to the day, the National Motor Museum, Beaulieu, is marking the occasion with a commemorative low-speed demonstration run with the Sunbeam, back at Pendine Sands.

The run will take place at 4pm on 21 July, starting from the area of the beach adjacent to the Pendine Museum of Speed.

The car will be driven by Sir Malcolm’s grandson, Don Wales, himself a Land Speed Record holder.

In addition to performing the run, he and the museum team will be aiming to re-create two iconic pictures from the original run.

Don said: “I am really looking forward to driving the 350hp Sunbeam, which is the car that gave my grandfather his first Land Speed Record.

“I cannot believe that I will get this fantastic opportunity to drive this iconic machine on Pendine. It will also be fun to dress in costume to look as my grandfather did in the pictures taken ninety years ago.

“My grandfather was a remarkable man and for us to remember him and honour some of his achievements in this way will be very humbling.

“I really must thank Beaulieu for this opportunity and for all the hard work the restoration team have done on her.”

The car was the brainchild of Sunbeam’s chief engineer and racing team manager, Louis Coatalen, and was constructed at the company’s works in Wolverhampton during 1919 and early 1920.

The Sunbeam, renamed Blue Bird by Campbell, holds three World Land Speed Records, the first achieved by Kenelm Lee Guinness at Brooklands in 1922 with a speed of 133.75mph.

Campbell then purchased the car, had it painted in his distinctive colour scheme and in September 1924 achieved a new record speed of 146.16mph at Pendine, raising it the following year to 150.76mph.

Campbell then sold the Sunbeam and it passed through a number of owners and was in a poor condition when purchased by Lord Montagu in 1957, for his ever expanding motor museum.

It was restored to working order and when not on display, it was taken to motoring venues in the UK, Europe and as far afield as South Africa.Its last outing was at the British Automobile Racing Club Festival of Motoring at Goodwood in July 1962 when Lord Montagu took it on a 3-lap demonstration run and Donald Campbell did a lap d’Honneur.

During a test fire-up in 1993 to assess the car’s condition, disaster struck when a blocked oil way in the engine caused it to seize and ‘throw a rod’. For several years after that, the car was on display in the museum with a very visible hole in its engine where the piston and con-rod had exited.

In January 2014, following a complete mechanical rebuild undertaken by the National Motor Museum’s workshop team over a period of many years, the Sunbeam was fired-up again – the first time it had been heard in public in over 50 years.

The following month it was a star of the show at Retromobile, Paris and was also run at the 2014 Goodwood Festival of Speed. 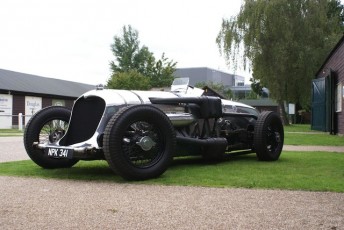 The 1933 aero-engined Napier Railton Special, which holds the all-time lap record of 143.44mph at Brooklands.

Doug Hill, the National Motor Museum’s Manager and Chief Engineer said: “We are delighted to be able to celebrate such an amazing achievement with this historic motorcar, 90 years to the day after Malcolm Campbell achieved 150mph with it on the same stretch of sand.

“Having spent over 2,000 hours on the engine alone, this low speed commemorative demonstration run is a fitting tribute both to the team of engineers at the Museum involved in its restoration and to the original creators of the car.

“It is also a tribute to Lord Montagu who had the foresight to preserve this iconic motorcar and to the courage and determination of Malcolm Campbell.”

Supporting the run will be the 1933 aero-engined Napier Railton Special, which holds the all-time lap record of 143.44mph at Brooklands.

The Napier-Railton has its own unique history at Pendine, having been the star (alongside James Mason and Ava Gardner) of the 1951 movie Pandora & The Flying Dutchman.

In the film, the car is used for an attempt on the Land Speed Record, for which the action sequences (culminating in the car being driven into the sea to quench an engine fire) were filmed on Pendine Sands during 1950.

In recent months, a film researcher has established that amongst the ‘extras’ in the crowd scenes for these sequences was the famed Welsh poet, Dylan Thomas.

Owned by the Brooklands Museum since 1977, the Napier-Railton will also run at Pendine, with Museum Director & CEO, Allan Winn, in the driving seat.