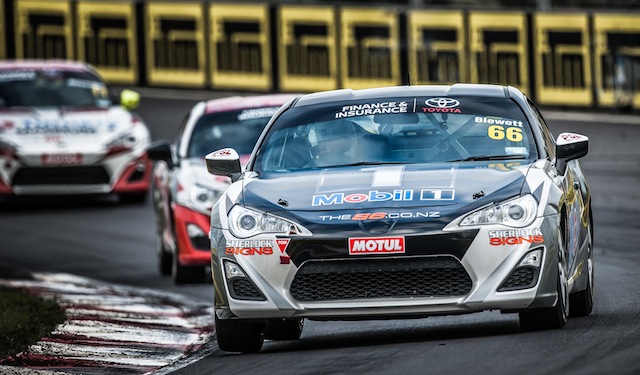 The pair had been equal on points after the first round, setting up an Auckland-Wellington duel for regional pride at the second round – as well as for the championship lead.

A hard-fought win in the first race on Saturday gave Blewett the early points advantage, then McNee fought back in the second race on Sunday.

In the afternoon feature race Blewett was unstoppable, fighting off McNee’s early challenge and then extending his lead out to more than a second.

The Auckland City Toyota cars of Marcus Armstrong and Tom Alexander swarmed past McNee and soon afterward Alexander was cleanly past his team-mate.

Callum Quin was a solid fifth behind the duelling lead group.

Matt Gibson, behind the leading group, was pushing hard to get past Callum Quin.

He challenged at the back straight right-left-right deviation and the hairpin, then he was past on the run up to the mountain, drawing Waiuku’s Cory Holmes along with him. Quin took back the place a lap later.

Tom Alexander had closed in on leader Blewett at mid-distance, overtaking with a determined charge after the hairpin, but the pair ran side by side up to the mountain and Blewett squeezed back into the lead.

Despite his best efforts Alexander was unable to overtake in the remaining laps, shadowing Blewett to the chequered flag. Marcus Armstrong was third, creating a double podium for the new two-car Auckland City Toyota team on debut.

The next round of the 2014-2015 Toyota Finance 86 Championship takes place at Ruapuna near Christchurch January 17 and 18, where the TR86 racers will share the race programme with the opening round of the 2015 Toyota Racing Series.

The 2014-2015 Toyota Finance 86 Championship is open to teams and drivers using the New Zealand-built TR 86 race cars and will be contested over six rounds.

It has its own TV package (screening on the Friday after each event) and features races at V8 SuperTourer and Toyota Racing Series events on circuits from Invercargill to Auckland.