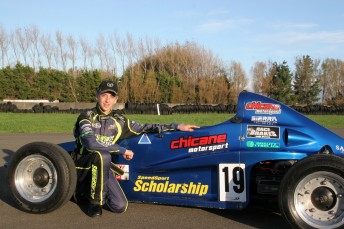 Blenheim based teenager Brook Reeve has won New Zealand’s most prestigious young driver development program after being a finalist in last year’s event.

Reeve was named as the 14th annual winner of the SpeedSport Scholarship, following a two-day run-off at the Manfeild race circuit near Feilding. He is also the first South Island resident to win the top prize.
After making the top-six Final last May, the 17-year-old put in a huge effort of personal development over the past year and returned to put in a dominent performance last weekend.
“I focused on all the things I had to work on from last year’s experience and to win this is amazing. It’s the best thing that has happened for me,” said Brook.
The former Marlborough Boys College student, this year studying the Motorsport course at UCOL in Palmerston North, began racing karts when he was six-years-old with the Marlborough Kart Club and has won National and South Island titles.
His first experience of driving a race car was during last year’s SpeedSport Scholarship and although that helped him to put in the quickest lap times, it was the bigger improvement in his off-track performance that helped him clinch the main prize.
“Brook made a significant improvement both on and off-track,” said co-founder Dennis Martin. “He is so much more confident this year and came back with the determination and the belief that he could win it [scholarship].”
Although Martin tutors and runs the scholarship winner in his Sabre Motorsport team, he has no influence or input into the judging process and is not part of the judging panel.
Palmerston North’s Travis Day, 17, a student at Rathkeale College in Masteron was named runner-up. He also raced karts for ten years before entering the SpeedSport Scholarship.
The other finalists included Matt Podjursky, 14, from New Plymouth, 16-year-olds Mitchell Turner (Hastings) and Brendon Jury (New Plymouth) and Connor Toki, 19, Palmerston North.
For winning the SpeedSport Scholarship, Brook Reeve will receive a fully funded season racing a Formula First car in the New Zealand championship series, a personalised race suit, boots and racing gloves from Chicane and a new Arai race helmet from Dold Industries.
Reeve is not the only finalist who has returned and put in a winning performance.  Shane van Gisbergen (2004) and Aaron Marr (2012) also won the SpeedSport Scholarship on their second attempt.