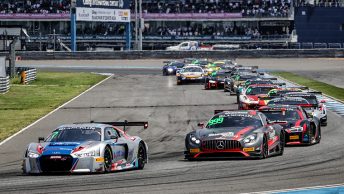 Following a month-long break Blancpain GT Series Asia’s inaugural campaign continues this weekend (June 23-25) with the first event of its Japanese double-header when the world-famous Suzuka Circuit plays host to a grid of GT3 and GT4 supercars across two 60-minute races.

Suzuka features one of the world’s few ‘figure-of-eight’ layouts, and is widely regarded as amongst the most challenging circuits in global motorsport. 18 corners – 10 of them right, eight left – make up the 3.609-mile/5.807km GP configuration, which has remained largely unchanged since first opening in 1962.

Taking on that challenge next weekend are Blancpain GT Series Asia’s teams and drivers for whom Suzuka marks their third outing, as well as fifth and sixth races, of 2017. They follow rounds at Buriram in Thailand last month and Malaysia’s Sepang season opener in early April.

Abbott partnered Raffaele Marciello in Malaysia but is joined at Suzuka by full-season co-driver and Mercedes-AMG factory ace Maxi Buhk, with whom he shared victory in Thailand.

“I’ve never been to Suzuka or Japan so I’m really looking forward to this one,” said Abbott, who also leads GT3’s Pro/Am standings by 23 points. “Suzuka is one of the legendary old-school circuits like Spa, Brands Hatch GP etc, which I love so can’t wait to drive it! We’ve had some challenges so far, like starting at the back of the grid for both Sepang races and the free practice accident at Buriram, but we’ve managed to come back fighting every time. I’m immensely proud of GruppeM and my co-drivers – everyone’s just put their heads down and powered through anyway!”

Several Audi crews also look strong ahead of Suzuka following success for its Audi R8 LMS Cup entrants at the same venue last weekend. Alessio Picariello, who reinforced his championship lead with a victory and second place, also claimed pole on his Blancpain GT Series Asia debut in Thailand. And he’s now back aboard the same J-Fly by Absolute Racing entry as co-driver to Pro/Am contender Jeffrey Lee. Elsewhere, Cheng Congfu – another driver to claim an Audi R8 LMS Cup victory at Suzuka – will be hoping to get his and Sun Jingzu’s Blancpain GT Series Asia campaign back on track after a tough start to the season.

Spirit of Race’s Rui Aguas registered his only points of the year thus far with victory in Buriram’s opening contest. His total – 25 – is the same as the team’s second 488 has achieved through sheer consistency, with Jiang Xin and Massimiliano Wiser yet to finish outside of the top-10.

Others to look out for include Alexs Au and Yoong whose Audi R8 LMS Cup-entered, Phoenix Racing Asia-run machine has been blighted by bad luck so far, GruppeM’s second Mercedes-AMG of Tim Sugden and Jules Szymkowiak, and Craft-Bamboo Racing’s #99 Porsche which sees Darryl O’Young reunited with the returning Peter Li.

GT3’s Am Cup should be fiercely competitive, too, with Sepang race winners Gregory Teo Bee Tat and David Tjiptobiantoro (T2 Motorsports Ferrari 488) returning to fight KCMG’s home favourites Naoto Takeda and Takuya Shirasaka. Both crews currently trail James Cai and Kenneth Lim in the points, but with the CMRT Eurasia Aston Martin not travelling to Suzuka it’s almost certain the category will have new leaders come Sunday afternoon. The Arrows Racing Porsche, which ran in the Pro/Am class at Sepang, adds further variety.