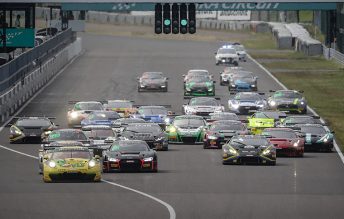 The pan-continental 2018 calendar was revealed during SRO’s annual press conference ahead of this weekend’s Total 24 Hours of Spa in Belgium.

While some exact dates are still to be finalised, a draft schedule featuring the same six venues as the series’ inaugural campaign was confirmed by championship manager Benjamin Franassovici and SRO’s CEO Stephane Ratel.

Following an impressive first half-season, which has featured an average of almost 30 GT3/GT4 cars at each round, SRO was keen to maintain a stable platform for existing drivers and teams, as well as new regional entries and their European counterparts eyeing a full-time programme or one-off Blancpain GT Series Asia entry.

Sepang, in Malaysia, once again stages the championship’s opening race weekend on April 14/15 before Thailand’s Chang International Circuit (also known as Buriram) welcomes rounds three and four on May 19/20.

The championship’s Japanese double-header is next up, with Suzuka and Fuji holding their rounds in June and July. Organisers are currently in discussion with representatives from both circuits to secure mutually beneficial dates.

China’s Formula 1 venue in Shanghai then hosts the first of two autumn events in the country. Just as in 2017 the first race weekend will take place in September before Zhejiang stages the final rounds in October. The latter’s status remains TBC at this stage.

SRO has also announced an extension to its team transport allowance. The first 25 entries to confirm their full-season participation – five more than in 2017 – will receive subsidised logistics fees totalling $400,000, while prize money available across the season totals $300,000.

In a change from 2017, SRO will support the development of the GT4 category in Asia by assembling standalone grids at every Blancpain GT Series Asia event with the exception of Fuji and Suzuka where the class will race together with GT3.

Championship Manager Benjamin Franassovici: “Blancpain GT Series Asia has so far exceeded all expectations during its inaugural season. But while we recognise the importance of growing the championship further, I think it’s also key to fully establish ourselves in the region. Offering our teams and drivers continuity and stability is very important to achieving this goal, especially as four of the six venues are current or former grand prix circuits. Right now there are few other tracks across Asia that appeal to our drivers more, or offer the same level of facilities, than the ones on 2018’s calendar.”

Alongside its Blancpain GT Series Asia commitments, SRO Motorsports Group will increase its presence across the region and beyond by overseeing several new GT endurance events. The previously announced 10-hour race at Suzuka for GT3/GT300 cars, co-organised by Mobilityland, GTA and SRO, will become part of SRO’s global Intercontinental GT Challenge. Meanwhile, the Motul Sepang 12 Hours has been incorporated into the new-for-2018 ‘Asia-Pacific 36’ championship schedule, which also features the Liqui-Moly Bathurst 12 Hour and a new 12-hour race at Hampton Downs in New Zealand.