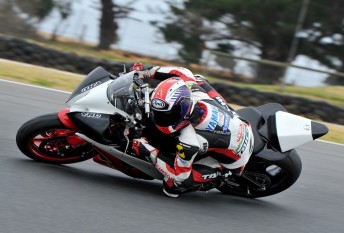 Michael was competing in the Australian Supersport support category at the World Superbike opener when he suffered a heavy injury to his hand which would prevent him from racing for the first half of the year.

Though he hasn’t been able to compete on the bike, Blair has placed a heavy emphasis on physical and mental preparation ahead of his return this weekend.

As he continues his recovery, Michael remains focussed on increasing his race fitness with numerous events planned over the coming months.

The break has also allowed Blair and his team to ensure their Yamaha R6 Supersport bikes are fully prepared for the impending races.

“My hand is still not fully recovered so that will still impact on my ability in racing however ultimately getting race laps under my belt is critical for the second half of this year.

“We have worked hard on preparing the bikes in my time off so we are looking forward to hitting the ground running from the first practice on Saturday,” Blair added.

The continued off-track support of Michael is something he credits to his positive outlook for the remainder of the season being back on the bike, with his sponsors committing to ensuring he will return to the top of his game in the near future.

“I have to thank all my sponsors, my family and my friends for their continued support over the last five and a half months that I have been off the bike.

“I have to make special mention to Yamaha and Arai Helmets for their support of me, it’s a great feeling to have such well-known and successful brands behind me.

“It certainly hasn’t been easy but I’m looking forward to rewarding them with some good results over the rest of this year and into 2015,” Blair concluded.

Round two of the 2014 Australian Superbike Championship takes place at the Phillip Island Grand Prix Circuit, Victoria from 18-20 July.