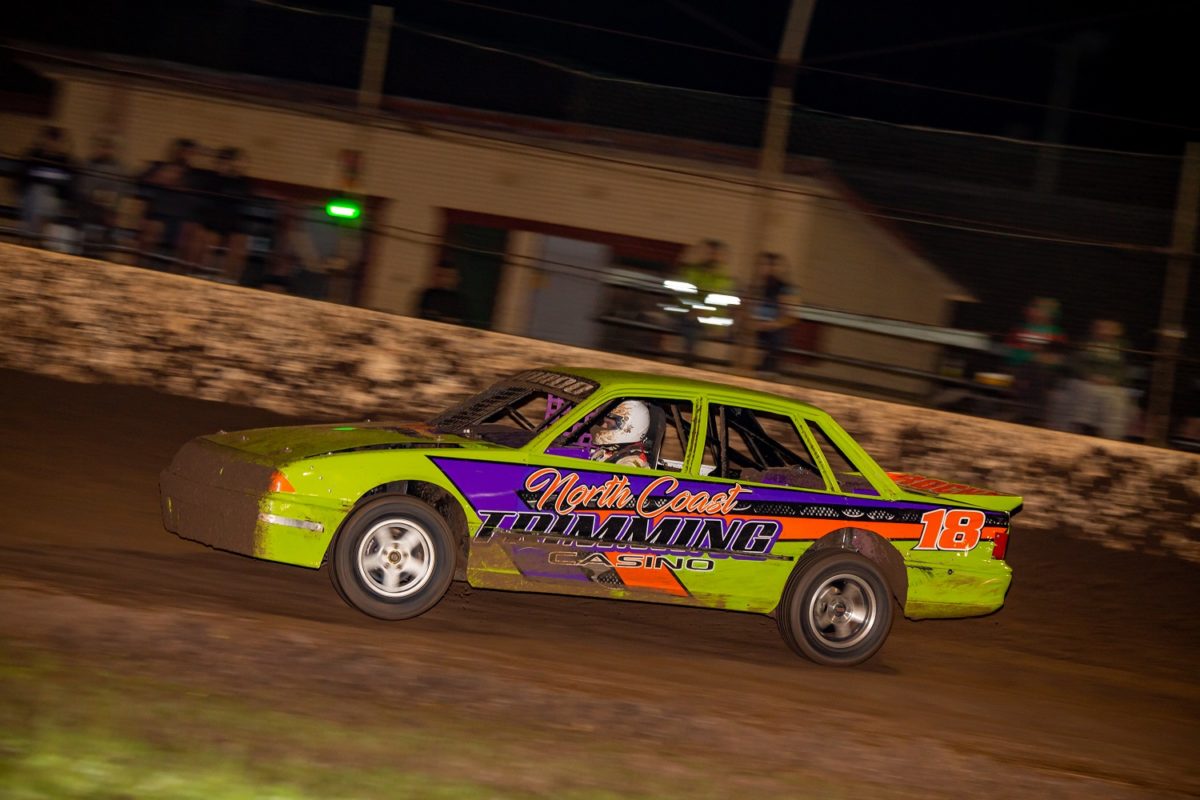 When it came to last Saturday’s 2021-22 season finale at Hessions Auto Parts Grafton Speedway, there were plenty of big battles – and that was just with the threatening wet weather. However, when it came to the racing action on the track, it was Lismore’s Jordan Biviano and Queenslander Mick Shelford who came away with NSW Title glory.

Leading up the last Saturday’s season finale, there was quite a lot of wet weather that affected the Grafton Speedway facility, but the promotion team, which were helped along by the wonderful support of volunteers and sponsors, didn’t let it deter them and they pushed ahead. Despite the wet weather interrupting the race meeting at one stage for an hour, they pushed on and were able to get the race meeting completed.

Although the wet weather affected the track, it certainly didn’t stop the competitors from putting on a show and full credit must go to them for playing their part in getting the race meeting in.

The headlining acts were the NSW Titles for Production Sedans and Modified Sedans and it resulted in the wins going to Biviano and Shelford respectively.

In the NSW Title for Production Sedans, Biviano, who had started from pole position for the feature race, was amongst the front runners for the entire 30-lap distance. Biviano chased after pole sitter and long-time leader Michael Mason and took control of the lead on lap 17, and from there, he was never headed and scored the win.

Joining Biviano on the podium was Mason in second and current Queensland Champion Daniel Henshaw in third. The top-five finishers were completed by defending NSW Champion Joel Berkeley, who was guest driving for the Lester Motorsport team, and Dakota Laverty.

As the current Queensland Champion, Shelford headed into the NSW Modified Sedan Title as one of the favourites. Shelford, who finished third in the last running of the NSW Title, didn’t let the pressure of being amongst the favourites get to him. In what was a hard-fought feature-race battle, Shelford was able to stay out of harm’s way and moved into the lead on lap 23, when he took the lead away from front-row starter and leader Shane MacDonald after he had made a driver error and collected the wall. Once out in front, he went on to greet the chequered flag the winner. Behind Shelford was fellow Queenslanders Shannon Blackburn in second and Shane MacDonald aboard his damage car in third.

To say that the NSW Title deciding feature race was a challenging one would be quite the understatement, and it saw several the favourites, including Kye Walters, Max Clarke (suspension damage), pole sitter and long-time leader Darran Lester (mechanical woes) and Nathan MacDonald (car damage), fall to the wayside in their attempts to capture the NSW Title honours. The most spectacular of the non-finishers was MacDonald, who rolled over on lap 13 while attempting to make his way to the front of the field.

In the support class action, David Putsey took out the final Northern Rivers Rumble Series round for the RSA Street Stockers ahead of Luke Gray and Connor Reeves. The Northern Rivers Rumble Series point score was picked up by Connor Reeves after he had finished Saturday’s action in third place. The other feature-race winners at the season finale were Brodie King (RSA Four Cylinder Sedans), Jeremy Wade (RSA Junior Sedans), Harry Fowler (SSA Junior Sedans) and Colin Crepin (Legend Cars).

The Grafton Speedway promotion team would like to thank everyone, including race fans, competitors and officials, for helping make the 2021-22 season a successful one. The team is now preparing to work on making the 2022-23 season even better.

Grafton Speedway would like to thank Hessions Auto Parts for all their support throughout the 2021-22 season. Based in Grafton, along with their nearby Coffs Harbour location, Hessions Auto Parts stock a wide range of parts and accessories at competitive prices.