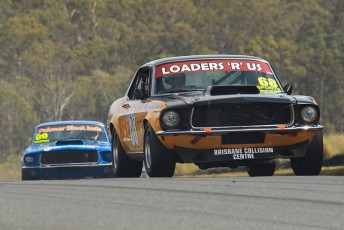 Bishop (Ford Mustang) drove away from pole position to four race wins on his way to claiming the crown in the Sportsman series, a class for over 5-litre competitors with a moderate budget. As the series draws to a close and with a maximum of 100 points on offer at the final round, Bishop’s 130 point lead is unassailable for Harry Charalambous (Ford Mustang) in second place and Dan Flemming (Ford Mustang) in third.

“I guess I would like to thank my sponsors (Blake Machinery Group and Agilis Accounting) for there support, without them it would be tough, and also to all of the Australian Trans-Am group for their help, it’s been a great ride,” said Bishop on winning his maiden motorsport title.

Australian Touring Car veteran Charlie O’Brien (Chevrolet Camaro) has one hand on the outright series title after claiming pole and four race wins to stake his claims for a back-to-back title. Heading into the final round with a 97 point margin, on count back by dropping the points from the last round, over his nearest rival Brett Curran (Ford Mustang), fresh from an impressive outing with the Touring Car Masters at Queensland Raceway, O’Brien only needs to finish a solitary race to secure his second consecutive title, with 5 points awarded for a placing.

Category Director John English (Pontiac Firebird), who was running third in the outright series prior to the round, and 5 Litre series competitor Tricia Chant (Ford Mustang) were involved in a collision in Friday practice, with the premature end to their race weekend hurting their hopes for higher honours in their respective classes.

A split 20 minute qualifying format was trialled at the round with the outright series cars taking to the track for a 10 minute session before the Sportsman and 5 Litre competitors, leading to the fastest times set in recent memory across all classes.

O’Brien entered unchartered territory with a 57.78, the fastest ever lap of the circuit by an Australian Trans-Am series car, to take pole position, ahead of Russell Wright (Ford Mustang) who briefly held the record by setting an impressive 58.38 earlier in the session and Shannon O’Brien (Pontiac Firebird) with a 58.59. Bishop qualified on pole in the Sportsman series with a 1:01.72, while Rob Hackwood (Ford Mustang) was the fastest of the 5 Litre series cars with a 59.55

Hackwood also enjoyed a clean sweep of race wins, to reduce defending 5 Litre champion Sean English’s championship lead to a single point heading into the final round series of the Australian Trans-Am series at Queensland Raceway on October 15-16.