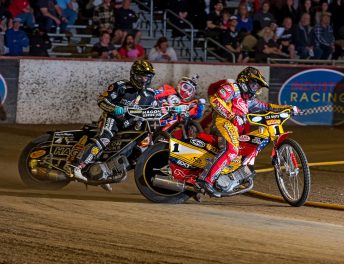 AMA Speedway National Champion Billy “The Kid” Janniro opened the 2017 season at Industry Racing / Speedway at The Grand with a third straight victory in the Connor Penhall Memorial Cup on May 31st, maintaining his undefeated record in the special event.

The Memorial Cup honors the late son of speedway icon Bruce Penhall, who passed away tragically while working in a freeway construction zone five years ago as a result of the carelessness of a drunk driver. In addition to putting on a spectacular night featuring the country’s finest motorcycle speedway racing, the event also serves as a tool to discourage drunk driving and raise awareness for safe driving near construction zones. In three short years the event has grown into one of the biggest races in American Speedway, in both prestige and in purse. The Grand Marshall for the event was legendary American Speedway racer Mike Bast, and attracted a stellar crowd for the opening night of Industry Racing’s 14th season.

Janniro entered the four-rider Final with first choice of starting position and, after a brief observation of Gate 4, decided on Gate 1, giving him the shortest and most direct line to the first turn. Luke “Little Missile” Becker quickly snapped up Gate 4, while Austin Novratil chose Gate 2 and left dreaded Gate 3 to Dillon Ruml.

Janniro was first off the starting line when the tapes went up but slid up the race track in the first turn to block any attempt of an outside run from his competitors. This left the door open on the inside, where Novratil tried to barge through the opening. Janniro daringly pulled down as they entered turn three, which forced Novratil to use all his skill to avoid hitting the race leader. While Janniro remained out front, Novratil paid the price of his evasive move and lost hold of second. Ruml assumed control of the runner-up spot and did all he could to try and chase down Janniro, but his all-out effort proved fruitless. Janniro was first to the checkered flag, with Ruml following in second. Novratil finished third while Becker completed the Final in fourth.

Janniro’s victory earned him the coveted Connor Penal Memorial Cup trophy, a custom-painted and mounted Troy Lee Designs helmet painted by none other than Troy Lee himself. Janniro has won the event each of its three years of existence.

Becker kicked off the evening with a victory over Novratil, while Ruml was victorious in Event 2 ahead of Broc Nicol, who returned from Europe to compete in the race. Janniro won Event 3 with Gage Geist finishing second. The first round concluded with a fantastic battle between Aaron Fox and Max Ruml, where Ruml emerged with a narrow victory at the finish line.

Max Ruml started the second round by defeating Nicol, while Becker earned his second straight victory ahead of Geist. Novratil used an outside pass on Gino Manzares to score his first win, as Janniro finished Round 2 with a win over Tim Gomez.

Manzares began Round 3 by holding off Fox for the win, but a mechanical issue following the race would end his night early. Janniro beat Nicol for his third win of the evening, and Novratil defeated Gomez for his second victory of the night. In a showdown between the Ruml brothers to close out the third round, Max outran Dillon to equal Janniro with three wins apiece.

Dillon Ruml opened Round 4 by getting the jump on Janniro off the line, but the veteran powered around the outside for the lead and took home his fourth victory. Max Ruml continued to match Janniro’s pace by defeating Becker for the win in the very next race, while Novratil beat Fox for his third victory. Rick Richards, who was scoreless after three rounds, scored a victory over Bob Hicks to wrap up the fourth round.

Entering the final round of Heats, Janniro and Max Ruml had each garnered a perfect score of 12 points. Novratil sat just a single point back with 11, followed by Becker’s nine points, Dillon Ruml’s eight points, Nicol and Fox with seven points apiece, and Gomez with six points.

Gomez, who made a competitive return after several years away, started the final round with an impressive win to get himself into the Semis. Becker then kept Dillon Ruml and Fox at bay in Event 28 for his third win.

The penultimate Heat brought the three top scorers to the tapes. All three were safely into the semis, but gate choice and momentum were on the line. The three-rider showdown was reduced to two when Max Ruml touched the tapes and was excluded. Novratil led Janniro to turn one but had his work cut out for him if he wanted to maintain the lead. Janniro threw everything at the former Under 21 National Champion, trying the inside line as well as the cushion, but the leader never wavered. Novratil held off Janniro and received a raucous ovation from the appreciative spectators. Nicol capped off the Heats by beating out Richards.

The first Semi saw Becker grab a great start from Gate 4, where he used the outside to move into the lead, while Novratil settled into second. Both riders successfully transferred to the Final. In the second Semi, Janniro was the early leader with the Ruml brothers close behind. Max Ruml tried an inside assault on Janniro, while Dillon used the outside. Max was unable to find a way past Janniro, and his commitment to pursuing the lead allowed Dillon to sweep around the outside to steal second at the finish line.

Enzo Sorani won his Heat and Semi in the Mini 150 Division, then completed a perfect evening with a victory in the Main Event. Slater Lightcap was second, with Luke Whitcomb third and Glenn Geist fourth.