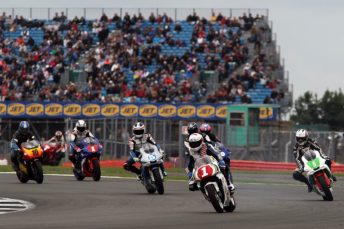 World GP Bike Legends served up a stirring and spectacular show at the recent Silverstone Classic (28-30 July) when a star-studded line-up of two-wheel heroes took to the famous GP track riding a combination of phenomenal 500cc two-strokes from the sport’s glory days plus new Yamaha YZF-R1s painted in evocative period liveries. What’s more, these exclusive retro-liveried R1s are now being offered for public sale.

“It was an awesome weekend on all fronts,” enthused WGPBL ambassador Wayne Gardner. “The Silverstone Classic is now one of the world’s greatest festivals and the presence of World GP Bike Legends certainly adds to the extraordinary show. With so many enthusiasts, it was the perfect event for us to debut our exciting new initiative with Yamaha.”

While Parrish, Costello, de Radiguès, Schmassmann and Gardner junior were all aboard fiery two-strokes, the five other legends debuted a quintet of dazzling Yamahas, all finished in very special racing colours.

Spencer’s design was based on the Yamaha he raced back in 1980, Read’s recalled his championship winning Yamaha of 1971 and Mackenzie’s livery honoured the Sanauto-Yamaha on which he contested 1992 500cc World Championship. Even more iconically, perhaps, Freddie Sheene’s much-admired R1 revived the revered Akai livery from the Yamaha his late father raced in 1981.

All five riders autographed their respective R1s which are now on sale via the www.legendsgpbikes.com website. Each one comes with a Certificate of Authenticity (also signed by the rider) and a dedicated plaque showing its position in the very limited WGPBL series.

The new collection of R1s, resplendent in their alluring retro colours, attracted massive attention at the Silverstone Classic both when on display in the National Paddock and when performing high-speed demonstration laps on the circuit.

Their impressive results, when added to those scored in Sunday’s follow-up showdown for the cars’ owners, ensured the Bike Legends team came out on top, in the process helping to raise more than £10,000 for Prostate Cancer UK, the event’s official charity.

More information and all the latest WGPBL news is available on the official website www.worldgpbikelegends.com and via the initiative’s social media platforms.