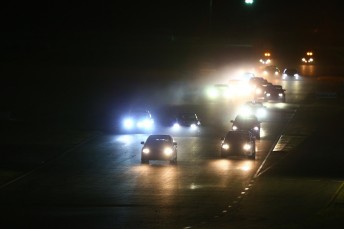 When the Australian Manufacturers Championship hits Queensland Raceway this weekend, it will do so with its biggest and best field of the year with 21 cars and a who’s who of names set to hit the Ipswich facility across August 8-10.

This weekend’s action will also see the 35 racers enjoy their first ‘sprint’ round of the year with two 200km races to unfold, including the ‘Fight in the Night’ under lights on Saturday evening.

Australian Manufacturers Championship Category Manager Rob Curkpatrick said hotly contested battles across the entire field can be expected with racers across all brackets sure to be giving it their all at what is the penultimate round of the 2014 championship chase.

“With 21 confirmed entries for this weekend’s AMCHAMP action at Queensland Raceway, this field is officially the biggest of 2014 for the category,” said Curkpatrick.

“When you take a look at the 35 racers who will take the wheels of those 21 cars, I venture even further to say it is the best field of the year.

“In every class there are hard chargers to be found and with Class B racer Grant Sherrin currently leading the outright title points there is a battle afoot in every sense of the word.

“I don’t think spectators will know where to look this weekend, there is going to be action aplenty.”

Leading the field to Queensland Raceway will be last year’s QR round winner Garry Holt (also the reigning outright AMCHAMP champion). The Eastern Creek Karts Mitsubishi Evo X driver will be joined by Stuart Kostera, with whom he took the round three victory last month.

Class A fans are also advised to keep an eye on the Melbourne Performance Centre Evo X and CXC Mitsubishi Evo IX of Robert and Shane Marshall and Dylan Thomas respectively. For both entries, the QR festivities signal a return of sorts – with Thomas making his first AMCHAMP start of 2014 and the round one-winning Marshalls looking to make up for lost time after missing round three while on a family holiday.

Also in the mix will be Aaron Seton – son of V8 Supercar/Australian Touring Car champion Glenn Seton – who despite his Class I characterisation (due to his rookie status) is expected to challenge the Class A entrants during his first solo national championship start.

In Class B all eyes will be on the Sherrin brothers (Grant and Iain) as the outright and class points leaders who have dominated the class so far this season, with Grant recently recognised as the Outright and Class B AMCHAMP Australian Endurance Champion.

Also looking for a big weekend will be their father Michael Sherrin, who will take to the track with co-driver David Ayres in the second Sherrin Rentals BMW 131i, as will newlywed Peter O’Donnell and co-driver Anthony Gilbertson (GWS Personnel BMW 335i).

Sure to be ones to watch following disappointing round three performances will be reigning Class B championship Michael Benton and Geoff Russell, and also Class C racers Mark Eddy and Francois Jouy. In Sydney last month, Benton and Russell suffered their first ever DNF in the Lovton Coal FG FPV, while Eddy and Jouy were served a ‘non-classified’ result in the Network Clothing/Dentbuster Renault Megane when they failed to meet the minimum race distance by one lap.

Also in Class C, the #13 Osborne Motorsport Mazda 3 will see team boss Colin Osborne team-up with Nick Lange. Lange’s co-driver Brock Giblin continues to make progress in his recovery from significant burns from a round three accident.  Amongst those racing alongside them will be class points leader Jake Camilleri who will drive his Grand Prix Mazda supported Mazda 3 MPS solo this weekend.

Finally, race fans will have a host of new faces to look out for in Class D with the #21 Disc Brakes Australia Honda Integra will be piloted by Bronte Michael and Gus Robbins and a sister Renault to the #88 also set to join the field. The Gosford European Car Services Renault Clio RS200 will be steered by husband and wife Franck Donniaux and Carly Black.

This varied entry list is testament to the ability of the Australian Manufacturers Championship – part of the Shannons Australian Motor Racing Nationals – to bring a wide variety of vehicles sold on the domestic automotive market to the track in competition for a prestigious CAMS title.

Featuring everything from high-performance vehicles all the way through to those running on alternative energy, the Australian Manufacturers Championship places style alongside muscle, ingenuity versus agility, and continent against continent across five national circuit racing events: