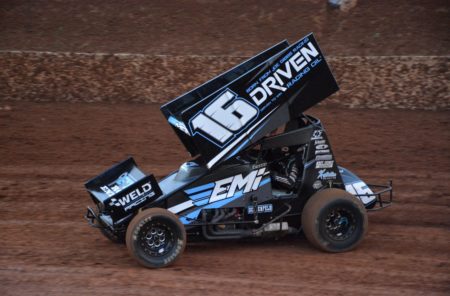 An action-packed round 13 of the East Coast Logistics Sprintcar Track Championship at Ausdeck Archerfield Speedway on Saturday night (March 14) saw Bryan Mann break through for his first feature win of the season, leading from the outset and awarded the win when the track curfew forced race officials to declare an end to proceedings five laps short of the scheduled 30-lap distance. Track championship leader Aaron Kelly finished second and it was Andrew Scheuerle who would secure the final spot on the podium.

Round eight of the American Tire and Racing Services Midget Series produced a remarkable finish with three different leaders on the final lap before Darren Vine also secured his first feature race win for the season, leading home Brock Dean and Charlie Brown.

Surging from the outside of row four, Casey O’Connell stormed to victory in the Queensland Wingless Sprint Championship to become the youngest winner in the history of the event. Brody Thomsen finished in second spot ahead of Dave Eggins in a race befitting the occasion.

Other feature winners on the night were Glen Lesslie (RSA Sedans), Ben Robertson (Open Sedans) and Terry Russell (Ford vs Holden vs Sigma).

Of the 24 drivers who hit the track for Sprintcar time trial qualifying, it was Callum Walker who stood tallest to emerge with KRE Fast Time, clocking a best lap of 13.744 to edge out Luke Oldfield (11.790) and Scheuerle (11.821). Mann (11.625) and Kelly (11.864) were next quickest ahead of a best ever effort from Andrew Baumber (11.872), with Cody Maroske, Dan Murray, Kevin Titman and Mitchell Gee rounding out the top ten.

From the outside front row, Brent Kratzmann was an easy winner of the opening heat, leading home Ryan McNamara and Mitch Gowland.

Back on track for heat four, Bonsey again proved too pacey, downing Nicholas Whell and Farrell to secure a spot in the Dash.

Heat five brought series combatants Kelly and Titman together and it was the latter who proved the quicker of the two on this occasion, finishing in second spot behind Adam Butler but ahead of Kratzmann.

Woods was untroubled in winning the final heat of the night, leading Corbet and Luke Oldfield to the flag.

The B Main was a straightforward affair at the front of the field with McNamara leading from the outset to defeat Whell and Gowland, while a frantic finish from Baumber saw him climb over Nelson Reddacliff as they crossed the line and, with a mere 0.001 separating them, both drivers would ultimately secure a start in the feature when Whell failed to make the grid.

Walker emerged from the heats as top qualifier, only to draw position six in the pre-race grid draw for the Trax Tyre and Auto Dash as Bonsey and Mann found themselves sharing the front row for the 6-lap sprint. From the outside, Mann blasted to the front and led every lap as Bonsey dropped another spot to Scheuerle, leaving Kelly, Oldfield, Titman, Walker and Butler to complete the field.

In the feature race, Mann again shot straight to the front and never encountered any real resistance, holding his position through a series of restarts before a final interruption when Tim Farrell crashed out brought an end to proceedings with 25 laps completed. Titman’s title aspirations suffered a setback when he nosed into the turn three wall on lap three to bring about the first stoppage, with further delays coming courtesy of spins from Woods and Baumber before another lap could be completed. Once underway again, Mann led Scheuerle, Kelly and Walker, who found himself swapping spots with Butler until the latter crashed out in turn four on lap 14. Back underway and Scheuerle occupied second spot until lap 19 when Kelly moved ahead and then, when Farrell wiped out in turn three on lap 26, the 10.30pm curfew intervened and Mann was declared the winner ahead of Kelly and Scheuerle. Maroske finished fourth but then debased himself with some pointless post-race histrionics that only served to undermine his effort in advancing from 10th, while a fifth-place finish from Walker saw him join Titman with more top-five results this year than anybody else. A surprisingly subdued Luke Oldfield finished sixth ahead of Woods and Kratzmann, with Corbet and Bonsey rounding out the top ten.

A scrappy start to heat three resulted in Brown tipping over in turn two and, whilst he would make the restart, he languished at the back as Glen Wright led home Chaffey and Rusty Whittaker.

Brad Dawson set the early pace in heat four, only to spin out of the lead on lap five. Vine would take maximum advantage to assume the lead, take the race and secure pole position for the feature, leaving Singleton and Matt O’Neil to fill the minor placings.

Come feature race time, the outside front row again proved the prime position as Whittaker blasted away to lead Vine, Singleton and Chaffey. With each circulation, Whittaker extended his advantage as the race ran 15 laps without interruption before a spin from Kody Stothard brought about a restart. Whittaker quickly re-established a sizable lead and looked on track for his third win of the season, only to bounce over the turn three cushion on lap 22 and crash out, handing the lead to Vine with just three laps remaining and, whilst the lap charts show that Vine would lead each of these, he had to survive an attack from Brown and Dean, the latter having advanced from position nine. Through turn one on the final lap, Dean charged under both Brown and Vine to edge ahead, only to find himself third again as they hit the back straight. Through turn three, Brown surged into the lead, only to make an untidy exit from turn four that would enable both Vine and Dean to slip ahead in the sprint to the chequer. Further back, Singleton secured fourth and Nathan Mathers finished strongly to snare fifth ahead of O’Neil, Wright and Chaffey, with Dawson and Tom Clauss completing the top ten.

The opening round of heats in the Queensland Wingless Sprint Championship were run at a cracking pace and it was Paul Robinson who got proceedings underway with a strong run to win the first qualifier by more than four seconds, outpacing Troy Carey and Jacob Jolley, whose subsequent disqualification would elevate Lachie Robertson into third.

No chasing required from Eggins in heat four as he led every lap to finish in advance of Brody Thomsen and Harris, while heat five fell in favour of Paul Freeman over Jarvis Menzies and the other Tim Harris.

Heat six saw Jamie Usher home first from Cody O’Connell and Scott Thomsen, who then backed up to win heat seven and secure a front row start for the feature. However, a second-place finish ahead of Jayden O’Toole was enough for Cody O’Connell to lock up pole position for the championship finale.

Brody Thomsen downed a Harris and Casey O’Connell in heat eight before a jubilant Ian Milnes secured his first ever heat win in the final preliminary, leading home Michael Butcher and a Harris.

The B Main proved a race of contrasts as Liam Atkinson demonstrated exactly how races should be won, charging around the outside to lead Jolley, Mick Reid and Anthony Grant to the chequer and into the feature race. Conversely, Gardiner and O’Toole served up an exemplary exhibition of what not to do when, occupying the first two positions, they decided to run into each other in turn one and throw away any chance of a feature race start with neither able to make any progress from the rear after the restart.

Yet again it was the outside front row that proved the prime piece of real estate for a feature race start as Scott Thomsen made easy work of securing the lead at the drop of the green, only to have the race halted immediately when Atkinson crashed out in turn one. Thomsen continued to lead through a series of early restarts following spins by Freeman, Butcher and Menzies, with Brody Thomsen also moving ahead of Cody O’Connell, whose younger brother had advanced from eighth to be fifth behind Eggins. As the race ran uninterrupted for an extended period, Scott Thomsen continued to lead while both Eggins and Casey O’Connell moved forward at the expense of Cody O’Connell. Having slipped ahead of both Eggins and Brody Thomsen by lap 15, Casey O’Connell swept into the lead on lap 20 as, further back, Jolley was putting on a mighty charge through the field and had climbed from 18th to be eighth when Troy Carey tipped over in turn two to trigger a final restart with four laps to run. Underway again for the final time, Scott Thomsen found himself backsliding through the field as Casey O’Connell charged to the chequer and finished more than two seconds clear of Brody Thomsen and Eggins, with Cody O’Connell finishing fourth. A barnstorming finish from Jolley saw him round up Usher, the two Harris’s and Thomsen to end a remarkable run in fifth spot. Harris, Harris and Usher were next in line, with Butcher and Robertson also moving ahead of Scott Thomsen to secure a top-ten result.

As the only Outlaw Sedan competitor in the combined RSA-sanctioned Sedan events, it was little surprise that Glenn Lesslie would win both heats and the feature with considerable ease. In the Limited Sedan ranks, Aaron Buchanan won both heats, but was outgunned by Rachel Hawkins in the feature race, with Greg Trezise, in third ahead of Shannon Knights and Michael Laver.

Following heat wins to Terry Russell and Maverick Dack, it was Russell who backed up to win the Ford vs Holden vs Sigma feature, leading home Dallas Dack, Brendan Mulcahy and the only other finisher in Kim Dack.

The next meeting at Ausdeck Archerfield Speedway is scheduled for next Saturday (March 21) featuring round 14 of the East Coast Logistics Sprintcar track Championship, Formula 500s, Compact Speedcars, Modlites, Microsprints, Late Models and Formula 500 Juniors. However, patrons are advised to follow Archerfield Speedway on Facebook for updates with regard to any subsequent changes to state/federal Government directives and/or advisories in relation to their COVID-19 (Coronavirus) containment protocols.