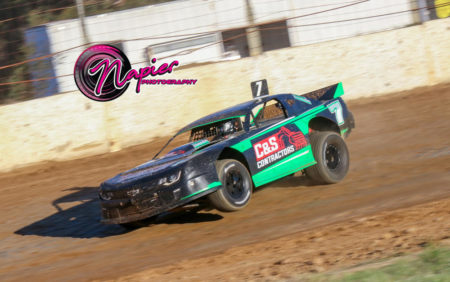 This Saturday night at Bairnsdale Speedway is a show you must see, so get in the line-up early to guarantee a spot, then sit back and enjoy the Victorian Title for the Unlimited Sedan race category, a feature event for Sprintcars and the local Limited Sportsman class along with a long list of Latrobe Valley and East Gippsland drivers in Standard Saloons and Division 2 Hot Rods, for a top night’s entertainment.

Taylor followed up his win at Bairnsdale three weeks ago with another at Wangaratta last week and is focussed on a rare Victorian title triple if he wins the big race on Saturday night after securing the previous two title wins. Bonnici is keen to get his hands on the coveted title trophy as to compliment his four trophies for winner the annual 100 Lap Derby in Alexandra. Observation from the sports media suggests that it is going to take a heck of a lot of unexpected variables to occur to stop Taylor; however the great thing about motorsport is we always expect the unexpected.

In Sprintcar racing, a huge feature race has been supported by local businesses A1 Trailers & A1 Solar and Electrical for the class, the event to be called the A1 Cup. Latrobe Valley racer and state champion Dennis Jones is leading the entrants with a class field set to fly. Bairnsdale racer Shane Steenholdt who won the first event of the season for Sprintcars will be back to attempt to double up, whilst Adam Greenwood, Mark Noonan, and Alistair Bastian also all from Bairnsdale are keen to defeat the big two. Justin Barton a winner at Bairnsdale last season comes up from the Melbourne Suburbs as does David McKay, both with claims on a victory result.

Limited Sportsman entries include local Bairnsdale members including Trent Wilson, Tim McKenzie, Matthew Hurley and Mark Both. McKenzie finished fourth in the last event at Bairnsdale for Limited Sportsman, the first local driver to finish with several Western Victorian drivers from Horsham and Hamilton in the field whilst Trent Wilson is hoping for a mechanically perfect weekend after barely turning a lap three weeks ago.

The Standard Saloon class had a Covid cancellation last week and had large numbers ready to compete at both Rosedale in the Valley and Nyora in South Gippsland, drivers in the class will be keen to make up for missing out with nominations for this Saturday.

The Bairnsdale association have a huge contingent of racers in the class with club champion Joshua Thomas always a favourite competing against Andrew Cormack, Ashley Cormack, Arron Cormack, Craig Cormack, Shaun Cormack, Michael Cormack, Peter Cormack, Nigel Frew, Clinton Geer and Steven Dadswell amongst others just from Bairnsdale. Then the visiting racers from further down the road that including the Stewart brothers Shane our last winner and Daniel and the Vuillermin brothers Jacob and Patrick, and add in Steven Danks, five very good drivers.

Division 2 Hot Rod racing has been popular for many seasons in the East and the class is amid a new growth spurt. A dozen cars are expected to nominate for Saturday night with drivers such as Mel Tatterson and her father Rob nominated, Daniel Angus, Ricky Low in his last race for now with the car sold and finding a new home and Troy Hutchison and Kane Gibson also in for a steer this weekend.

Gates will open to the public from 1pm with racing from 5.30pm. Tickets can be brought online or in cash only from the entry, no card facility available. Adult entry is $20 a head whilst aged pensioners are $15 only Children aged between 12 and 16 enter at $8 each and all children under the age of 12 enter free.