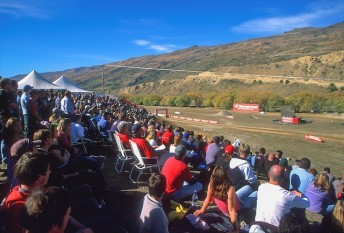 Kiwi motorsport fans heading for Repco Race to the Sky later this month are set for a full weekend of fantastic racing and entertainment as the revitalised international hillclimb event returns for the first time in eight years.

And Kiwi rally star Hayden Paddon wishes he could be among the upcoming action.

“Race to the Sky was one of those events that Dad and I attended every year as spectators and it would have been great to be there this year,” says Paddon who will be competing with co-driver John Kennard at the Argentinian round of the World Rally Championship in his Hyundai i20 the same weekend as Repco Race to the Sky.

“It was always the highlight of the year – the road trip, the cars, the drivers, the walk up the hill to find the best spectator spot. I have very fond memories and the only year we did not go was the year Possum had his accident as everyone was shocked.”

Paddon says Possum Bourne was always his favourite Race to the Sky star. “It was always a great battle up the front and the year Possum won was amazing. 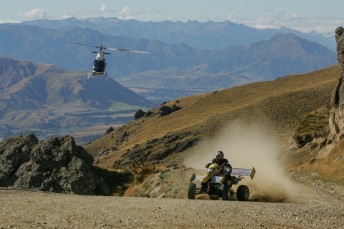 “It’s just an amazing event – it’s the longest gravel hill climb in the world and the atmosphere in the paddock, the cutthroat competition of the one and only final run make it different to anything else.

“It’s certainly an event that I would like to do in the future, and think a Hyundai hillclimb special would look good getting up the hill. It’s certainly on the bucket list!”

While many local fans would also love to see Paddon competing in this year’s Repco Race to the Sky, they’ve got plenty of exciting competitors and action to look forward to, says Melanie Kees, event marketing manager for Highlands Motorsport Park and part of the team organising the revived Race to the Sky event.

“Adding to the spectating experience will be a big screen showing live and replayed in-car footage and interviews with competitors delivered by an on-site television production team which is also making a one-hour television highlights package to screen on TV3’s CRC Motorsport show on Sunday 10 May,” says Ms Kees.

The screen will be situated in front of the main spectator area on the plateau which faces the spectating embankment, and fans will be able to see past this to the hill up which more than 100 competitors will race during the two-day event.

“Make sure you’ve got a good spot in sight of the big screen for Sunday’s top 20 shootout – yes, we’ve expanded the traditional top ten shootout to enable the fastest 20 competitors from any class to enjoy a little extra time in the spotlight,” says Ms Kees.

“Spectators can also enjoy a range of activities and entertainment in the event village on the plateau. The pit area is open and free to walk around so you talk with your favourite drivers and check out their awesome cars, bikes and quads.

“Seven-time New Zealand and three-time Australian motorcycle trials champion Jake Whitaker and his crew joins us again to provide an incredible display of his skills. Jake’s trials bike stunt show is brilliant and we can’t wait to welcome this young star back to another Highlands-run event.”

Children’s activities are always a key part of any Highlands event and Ms Kees has ensured that there’s plenty to keep kids entertained in the family area beside the band’s stage.

“The massive Spiderweb climbing structure with its enormous inflatable slide will that proved hugely popular at Highlands January event, so that’s going to be set up in the Repco Race to the Sky family area along with a bouncy castle and more.

“A great way to let your kids burn off some energy before strolling through the market stalls and enjoying some of fantastic warming food and beverages on offer from a range of top class local providers.”

Ms Kees adds: “Complementing the fantastic on-screen action we’ll be enjoying from Repco Race to the Sky competitors, on the Sunday, we’ll also screen live the start of the Cardrona Mega Avalanche downhill mountain bike race taking place on the opposite side of the valley at Cardrona Alpine Resort.

“We’re delighted to be working with Cardrona to showcase their debut Mega Avalanche race to Repco Race to the Sky fans.

“We’ll get to see the exciting race start as hundreds of mountain bike racers sprint to get to the front of the pack before entering the narrower sections of the course which then takes them 14 kilometres, down 1,300 vertical metres on a mixture of open trails, twisty single tracks, steep descents and narrow technical switchbacks before the race finish in Cardrona Village.”

Ms Kees reminds anyone interested in camping on-site that they must register for a campsite before the event by emailing [email protected] with the subject line ‘motorhome’ or phoning the Highlands office on 0508 HIGHLANDS. Camp sites are available only for self-contained campers, not tents or campervans without the required self-containment facilities.

“And a final reminder for anyone interested in the corporate hospitality facilities – these are selling fast so get in now if you’re keen.”

The 18-19 April running of Repco Race to the Sky takes place in the Cardrona Valley, Central Otago. General admission tickets, priced at $50 for an adult for either day or $80 for a two-day weekend pass, are available online from Ticket Direct – simply search for Highlands – or from the Highlands Motorsport Park offices.

Single day tickets are also available at the gate, but the weekend pass is only available pre-event. Full details about the event, including camping and corporate hospitality options, can be found on the event website http://www.racetothesky.co.nz/, or visit the Facebook page https://www.facebook.com/HighlandsMotorsportPark.