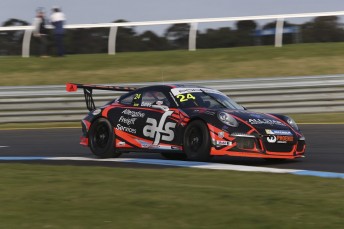 A Carrera Cup round win has evaded Alternative Freight Services/All Star Equipment Sales driver Tony Bates, after some more misfortune in the two races at Sandown yesterday (Sunday).Bates started from the Elite Class pole position after his fine win in yesterday’s opening race, but Race 2 lasted just a few hundred metres before being terminated by a massive crash.“When I arrived at Turn 1, I saw Nick McBride had spun so I veered left to avoid contact,” Bates said.“The next thing I knew, Duvashen Padayachee shot in front of me and I had nowhere to go – I collected Padayachee and there was a lot of damage to the front-right of my car.”The Tony Bates Racing crew immediately set about repairing the #24 Porsche 911 GT3 and after a herculean effort, the car was ready to race just two hours later.In even better news, the Race 2 incident resulted in it being declared a non-event, allowing Bates to return to pole position for the start of Race 3.“The crew did an awesome job, under massive time pressure; I can’t speak highly enough of their hard work,” Bates said.Another storming start saw Bates passing a couple of Professional Class competitors and running as high as sixth outright after the first lap.As the race progressed, Bates found himself embroiled in a battle with Elite rival Stephen Grove, and lined up for a passing move.“I had a good run on Grove up the back straight, and saw an overtaking opportunity into Dandenong Road Corner,” Bates said.“All race long, my brake pedal was soft and I was trying to bring my pedal up and shifting my brake mark back.“Unfortunately, I didn’t quite pull up as well as I has all weekend into Dandenong Road,  and I had to run through the gravel trap to avoid colliding with Grove’s car.“I also flat-spotted a tyre quite badly and had to cope with a vibration for the rest of the race, so from there it was a case of bringing the car home.”Bates finished seventh in the race and second for the round. After again being the fastest Elite driver he rued what might have been.“It’s the second round in a row where Saturday has been excellent, we won the race and then I’ve missed out on results on the Sunday through no fault of my own,” he said.“Looking at the positives, we clearly have pace and the car is excellent; Ash, Liam and Lee have been preparing a good car all year and especially strong in the last couple of rounds as the team has continued to learn this new car and how to extract the most from it.“My rivals didn’t gain too many points in the championship so we’re still in the hunt with two rounds to go at Bathurst and Surfers Paradise.”Round Results Summary – Round 6Qualifying: 1stRace 1: 1stRace 2: No raceRace 3: 7thOverall: 2ndPorsche Carrera Cup Points – Elite Class1. Stephen Grove – 7952. James Bergmuller – 7203. Tony Bates – 6834. Shane Smollen – 6455. Roger Lago – 6406. Tony Walls – 518=7. Ash Samadi – 493=7. Brenton Ramsey – 4939. Marc Cini – 37710. Maurie Pickering – 288