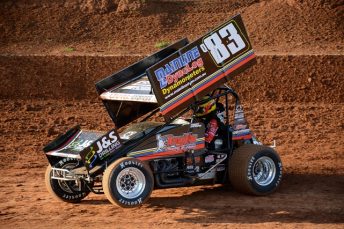 The biggest name in the Sprintcar game headlines a stellar line-up of more than 100 competitor nominations for the annual Boxing Day blockbuster at Ausdeck Patios Archerfield Speedway on Tuesday night (December 26). Yep, none other than current and 9-time World of Outlaws Sprintcar champion Donny Schatz returns to Brisbane for another exclusive Archerfield campaign to take on more than 35 other drivers in round eight of the East Coast Logistics Sprintcar Track Championship. Schatz will be joined by fellow WoO ace Logan Schuchart, who is undertaking his second racing campaign in Australia, with Compact Speedcars, Modlites and Formula 500s also on the program, plus Monster Trucks and a spectacular fireworks show.

In addition to clinching his ninth WoO Championship in America this year, Schatz also won the famed Knoxville Nationals for the 10th time and clinched his fourth victory in the King’s Royal, becoming the only driver to win the race in consecutive years. Schuchart also arrives in Australia on the back of some strong WoO form, winning four series rounds and finishing ninth overall in the championship standings. The American duo will face off against a collective of in-form locals comprising Luke Oldfield, Mitchell Gee, Callum Walker, Andrew Scheuerle, Peter Lack and Allan Woods plus another 30 drivers desperate to make their mark and upstage the world champion. Former track titleholder Bryan Mann and current Australian Dirt Modified champion Kevin Britten make their first appearance for the season, the likes of Ben Hilder and Brent Kratzmann have produced plenty of speed so far this season without yet breaking through to secure a podium result and WA young gun Kaiden Manders is a real threat to the locals and internationals alike.

The Compact Speedcars have certainly embraced the opportunity to be part of the big show and they have produced their best field – both in quality and quantity – in recent memory with 23 drivers set to hit the track. In addition to the drivers that have been the standout performers so far this season, such as Dave Collins, Trent Usher, Wayne Corbett, Matt O’Neill and Tim Farrell, the field also includes Robbie Stewart and Australian champ Darren Vine, both of whom have been focussing on their Midget exploits so far this season. There are 10 or more genuine feature race contenders in the 23-car field, which sets the scene for some sensational racing.

Also securing their biggest field for the season thus far, the scenario within the Modlite ranks is somewhat different to what we have seen in recent seasons with Klinton Hancey having emerged as the new benchmark competitor with a series of great results at Archerfield and elsewhere. Despite the presence of both Australian champ Aaron Prosser and Queensland titleholder Terry Leerentveld in the 22-car field, Hancey has earned pre-event favouritism and will be primed to produce another standout display in front of a big Boxing Day crowd.

Despite the fact that a few regulars are away chasing the Speedweek Series in Victoria and Australian champ Liam Williams is competing in America, it is still a solid field that will contest the opening round of the Ian Boettcher Race Parts Stampede. Kristin Brown and Tristan Johnson seem certain contenders, although the form of Junior graduate Nick Hodges has been tremendous and Australian Lightning Sprint champ Kurt Wilson is another who must be considered a genuine threat despite his limited experience in this category.

The next batch of open wheel stars will also strut their stuff on Tuesday night with a 9-car field of Junior Formula 500 racers showcasing their considerable talents as they prepare to follow the likes of Hodges, Brady Argles and Randy Morgan in making a successful transition into the open ranks.

In addition to the racing action, the Boxing Night spectacular will also feature Monster Trucks and Fireworks, with children aged 12 years or under admitted free when accompanied by an adult. Tickets can be purchased in advance from the track website – www.brisbanespeedway.com.au – with online ticketholders securing early entry to the grounds from 3.30pm.