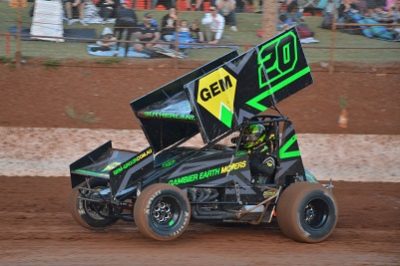 South Australia’s Glen Sutherland is one of 36 drivers nominated for round two of the ECL Sprintcar Track Championship pic: Chris Metcalf

A four-week break in competition is unheard of so early in a speedway season, but that is how long it has been since Ausdeck Patios Archerfield Speedway fired into life with the opening round of the East Coast Logistics Sprintcar Track Championship way back on September 22. Since then, wet weather has swamped Brisbane and other regions to cause havoc with speedway scheduling and force the cancellation of round two of the track championship. The extended break in competition has certainly left teams itching to get back on track and, as a result, in excess of 120 competitors have nominated for competition this Saturday night (October 27), including more than 35 Sprintcar thrill-seekers from Queensland and interstate contesting round three of the ECL Track Championship. Midget numbers have also swelled for round two of their Polar Ice Track Championship, while AMCA Nationals, Formula 500s, Open Sedans and Ford vs Holden vs Sigma sedans are also on the program.

Leading the Sprintcar Track Championship following his stunning drive to victory in the opening round is Gold Coast-based teenager Lachlan McHugh. Riding high on the back of what was a terrific drive that saw him chase down the likes of Peter Lack and defending track champion Andrew Scheuerle to secure victory, the extended time on the sidelines has no doubt left the youngster frustrated in his determination to get back on track in search of a repeat result. However, making his first appearance for the season this weekend is former track champion and state titleholder Luke Oldfield, whose hard charging style has made him a crowd favourite and delivered him a multitude of feature race victories at Archerfield. The showdown between McHugh and Oldfield is enough in itself to whet the appetite for race fans about the excitement that Saturday night will bring, but when you add Scheuerle, Lack, Queensland champ Mitchell Gee and the South Australian-based duo of Steven Lines and Glen Sutherland into the mix, anything is possible and the only certainty is that the level of competition will be exceptional.

Lines remains the only other driver to have scored a Sprintcar feature race win in Queensland this season, while finishing second behind McHugh in the opening track championship round saw Scheuerle make an immediate declaration of his intention to vigorously defend his title. After leading early before fading to finish third in the series opener, Lack will have his eye firmly on the prize this weekend, along with the likes of Brent Kratzmann, Allan Woods, Kevin Titman, Brock Dean, and Australian Dirt Modified champion Kevin Britten, with Tony Wynne also returning after an impressive showing in round one. Gee, meanwhile, will be desperate to make amends for a late-race spin in the series opener that left him 13th overall at the chequer after a superb start to the night that saw him emerge with Fast Time in qualifying.

A strong rookie contingent will continue their Sprintcar assimilation as round one debutants Trent Vardy, Justin Snellman, Libby Eillis, Tim Farrell, Geoff Davey and Andrew Baumber are joined by Formula 500 graduate Ryan McNamara in making their first assault on the track championship.

After a very small field contested the opening round of the Polar Ice Track Championship in September, a much stronger contingent will do battle in round two this weekend. Round one winner Adam Clarke heads a line-up which includes Darren Vine and Brad Dawson, both of whom joined Clarke on the podium in the season opener. Boosting the field this Saturday night will be defending track champion Scott Farmer and regular front runners from seasons past in the form of Rusty Whittaker, Troy Ware, Anthony Chaffey and Scott Doyle. Kiwi gun Ricky McGough is a welcome addition to a field that seems certain to provide Clarke with a considerably tougher challenge in his bid for back-to-back wins.

If the quantity and quality of drivers nominated for the opening round of their Shock Absorber Therapy Track Championship is any indication, AMCA Nationals look set for a huge season with 22 cars entered. With category front runners Steve Potts, Matt Hardy, Nathan Durston, Lee McKinnell, Steve Price and Michael Mason all amongst the entries, the feature race looms as a thriller with Russ Hardy, Thomas Vickery and NSW’s Tony Blanch also expected to feature prominently in proceedings.

Having also seen round two of their NuPave Championship Series succumb to wet weather, Formula 500s roar back into action with national champ Liam Williams once again the benchmark that needs to be conquered in pursuit of feature race success. Those who have come closest to upstaging Williams thus far this season are Kristin Brown, Ryan Skennar and Mitchell Whittaker and it is from this trio that Williams is expected to again face the most resistance, although Junior graduate Tarhlea Apelt could certainly emerge as a spoiler if she can avoid a repeat of the mechanical maladies that hampered her opening night campaign.

A line-up of 30 Open Sedans will compete in two divisions, both of which have produced their strongest opening night fields for several years, while Ford vs Holden vs Sigma sedans will complete a huge program. Gates open at 4.30pm, early racing gets underway from 5.00pm, Sprintcars hit the track for Time Trials from 5.30pm and the main program kicks off at 6.00pm.