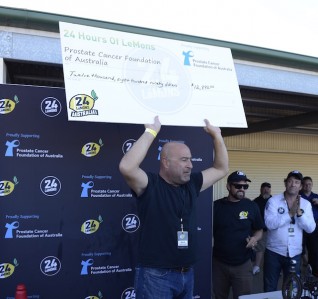 MEDIA RELEASE: The inaugural 24 Hours of LeMons Australia event, which wrapped up at Wakefield Park today, has been hailed a great success, with almost $13,000 raised for prostate cancer research thanks to the generous support of the participants.

The event pitted teams, each with up to six drivers, against each other in a marathon endurance trial over two eight-hour days; teams were only allowed to spend a maximum of $1,000 on the purchase of their cars.

The lap charts fluctuated significantly over the two days, with a number of different teams spending time in the lead, but in the end it was experienced racers David Raddatz, Nathan Jess, Nick Cancian, Daniel Byron and Harry Hayek who took the win in their Team Matar MX5 Mazda 3, completing a total of 641 laps – 1,410 kilometres – in their 16 hours on the track.

Raddatz and Jess have already tasted success in endurance racing at Wakefield Park – both are winners of the Wakefield 300 endurance race – but Raddatz said today’s victory was particularly sweet.

“The little Mazda 3 went awesomely all day; we had a couple of long pit stops to change brake pads but we were able to pick up the laps we lost, and we hit the lead.

Second place went to the Ravage Raceworks Ford EL of Dean Lillie, Craig Piergrosse, Andrew Scott, Michael Wilson, Paul Joseph and Rick Newman. They held a commanding advantage after Day 1, holding an eight lap lead, but an exhaust problem early in today’s running cost them a number of laps in the pits.

Throughout the event, a number of drivers received penalties for indiscretions; rather than the stop-go or drive-through penalties typically applied in other forms of 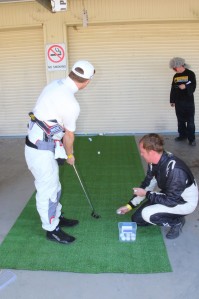 Competitors received a number of quirky penalties throughout the event

motorsport, competitors had to take part in challenges such as shooting basketball goals, solving a rubix cube or apologising in pit lane with a megaphone.

Drivers’ penalties were often reduced if they donated to charity.

In the end, a total of $12,890 was raised for prostate cancer research. The LeMons organisers have plans to improve upon the event for 2016, with announcements expected shortly.