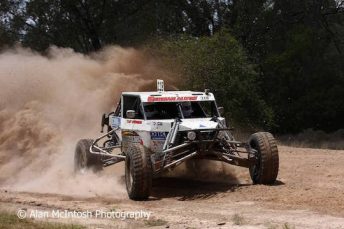 Queensland’s St George will play host to Australia’s best off road racing talent this weekend, when round one of the BFGoodrich CAMS Australian Off Road Championship (AORC) kicks off tomorrow.

Over 45 competitors will tackle the purpose-built 35-kilometre loop; 11 laps of the course will deliver 400 competition kilometres in total across the event.

Experienced off road competitor Geoff Pickering is looking forward to getting out on the new course in his Pickering Auto Group Mitsubishi Pajero.

“It looks like the course has some substantial long straights which will mean high speed and about a third of the track looks like it is technical,” explained Pickering.

“In a short 35-kilometre lap with many cars on the track my navigator will certainly be watching the rear-view mirror for the high performance cars coming up behind us.

“This is the first race of the year so it’s a great chance to shake the car down and get the team working together professionally.”

Tait Svenson, competing in the prolite class in his German Autos 3.5L Stealth, said there will be a huge variety of vehicles on track this weekend.

Svenson explained that an event like the St George 399 can have a high attrition rate.

“This track looks very fast so it’s going to be hard on engines I think; it would not be a surprise to have up to half the field suffer mechanical issues throughout a race like this.”

Jodie Allen will make her long-course debut this weekend in the Claytons Towing Service Toyota FJ Cruiser in the production four-wheel-drive class.

“I’m expecting a lot of challenges this weekend; I don’t really know what I’m in for as I’ve only had the car for about seven months. I’m just going to give it a red hot go,” she said.

“The high-speed sections will be completely new to me as I have gone from winch comp challenges, which are slow and winching though things, to a high speed event so it’s going to be foreign to me.

“This weekend will be great for seeing how my fitness goes over a long distance, in preparation for the Finke Desert Race in a couple of months.”

Trent Challenger, buggy driver, local business owner and event track designer, is an integral part of the team that is the driving force behind the St George 399.

“Finally seeing the St George 399 come to life is satisfying pay off after years of effort to get the event going,” Challenger says.

“This track should suit all racers—straights for the big boys, with flowing sections that all will enjoy, also a couple of tight bits for the little guy to make up some time on. I’m excited.”

“The club is really excited to be the first round in the 2017 BFGoodrich CAMS AORC. I cannot speak more highly of the St George residents and the helpful staff and councillors of the Shire of Balonne. They can see the benefit our event will bring to the region.

“There’s a few farms along the course and the farmers have been amazing—offering to help prepare the course and be a part of the event—and they are not even club members!”

CAMS yesterday announced BFGoodrich Tires as the naming-rights sponsor of the AORC for the next three years.

The St George 399 kicks off this afternoon with scrutineering at the St George show grounds from 4pm; the racing action starts on track at 8am on Saturday and Sunday at Salmon Road, nine kilometres from St George.