BFGoodrich CAMS Australian Off Road Championship up for grabs at Rainbow

BFGoodrich CAMS Australian Off Road Championship up for grabs at Rainbow 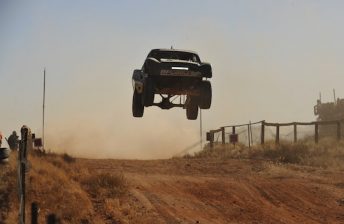 The 2017 BFGoodrich CAMS Australian Off Road Champions will be crowned at the conclusion of this weekend’s Hindmarsh Shire Rainbow Desert Enduro supported by GrainCorp—but just who will take out the title is still anyone’s guess.

Outright and class championship titles are well and truly alive as Australia’s best off road teams head to the third and final round of the Australian championship; with a maximum of 529 points available at this round—1.5 times more points than at each of the first two rounds—a solid performance is vital for teams in the championship hunt.

Martin and Browning have their own battle going on in the Prolite class, with just 30 points separating the pair.

The Extreme 2WD class championship will be decided at the Rainbow Desert Enduro; Michael Mclean and John Stewart are 54 points ahead of Tatts Finke Desert Race runners-up Beau Robinson and Shane Hutt. Steven Sanderson and Tahlia O’Cass are not out of it either, only 33 points further adrift.

The popular Superlite B class is anyone’s, with Nathan Chivers and Scott O’Connor leading Greg Campbell by 26 points; Michael and Mitchel Schnieder are a further 28 points adrift.

The closest battle will be between Paul Malt/Rick Norris and Travis Rosewarne/Mark Nelson in the Extreme 4WD class; just one point separates the two teams after two rounds. Matt Gardiner and Levi Saleeba also have a shot at the class title, sitting third only 79 points behind.

Located in the historic township of Rainbow in Victoria, some 400 kilometres north-west of Melbourne, the local community is set to embrace the inaugural Rainbow Desert Enduro with scrutiny and a public display of cars taking over the main street of the town on Friday afternoon.

Over 50 teams will tackle the 80 kilometre track on the north-west outskirts of the town; spectators can see all the action from the the GrainCorp Race Centre, featuring the competitor pits and spectator viewing.

Run by the Victorian Off Road Racing Association, the event promises to be an exciting finale to the 2017 BFGoodrich CAMS AORC; it is also a round of the CAMS Victorian Off Road Championship. For further information visit www.aorc.com.au.

2017 BFGoodrich CAMS AORC Points – after round 2