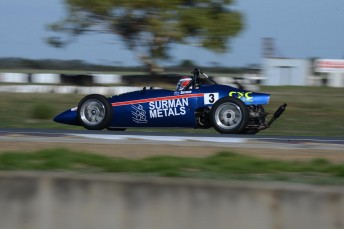 The second round of the 2014 South Australian State Motor Racing Championships will be one that encompasses the best in both open-wheel and tin top racing from around the country with the opening round of the Clemenger International Freight Formula Vee Australian Series joining the State Championship.

Formula Vee has long been recognised throughout the Australian motor racing community as a category that has produced some of the best racers the country has seen, including former V8 Supercar driver and team owner, Larry Perkins.

The Volkswagen based open wheel car can come in two varieties, 1200cc and the more commonly seen 1600cc with chassis developed primarily by Australian builders including Victorian based Borland Racing Developments who are responsible for the Sabre cars and Jacer cars of whom are developed in Sydney.

HQ Holden racing has been an Australian tradition for many years, first being developed as an entry level category to further tin top racing. Based on the original car developed through the 1970’s, the racing version of the cars run with a standard 202 motor, three speed gearbox and rear drum brakes making them a challenge to drive and requiring more than your average level of hard work in racing to succeed in.

The concept of HQ Holden racing originated in Tasmania before being introduced to South Australia by the Sporting Car Club with the first event being held at Mallala in 1989.

With the event winner being crowned the South Australian State Champion, competition is expected to be at an incredible high as some of Australia’s best converge on Mallala to battle it out for the silverware.

Improved Production as with HQ Holden’s will conduct their State Championship at Mallala next weekend.With cars varying from Japanese built turbo machines to high powered Australian built V8 cars, the category provides the opportunity for amateur and inspired racers to develop a car they are passionate about and test their abilities against some very talented drivers both locally and from around the country.

Improved Production cars are defined as ‘commercially available touring cars’ with allowances for a reasonable level of modification to give both the racer and the designer room to create an exciting form of race car.

Qualifying and the opening races will take place throughout Saturday with racing set to fill the program for Sunday.

Round 2 of the 2014 South Australian State Motor Racing Championships incorporating Round One of the Clemenger International Freight Formula Vee Australian Series will take place at Mallala Motorsport Park on Saturday and Sunday 31st May and 1st June.