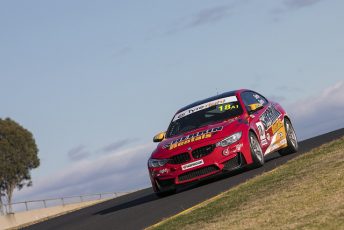 The Sherrin Racing BMWM4 has come home with a best-ever race result of second and a personal-best round result of third outright and in Class A1 for the Tyreright Sydney Challenge, held at Sydney Motorsport Park this weekend.

Meanwhile, the Class B1 entry of Michael Sherrin and Stephen Champion – the #19 Sherrin Racing BMW135i – took home two class race wins on their way to securing the runner-up in class spot, missing out on the top spot by just one point.

The results for the team come after what has been a character-building start for the year, but with the teething problems of the M4 now seemingly resolved, things are looking up for the hard-working family crew.

“Saturday’s race one was our fifth start for the Sherrin Racing BMW M4 and to say we were delighted to bring home our first race finish for the car in that outing would be an understatement,” driver Grant Sherrin – who celebrated his birthday on Saturday – explained.

“The car had always boasted lightning quick speed especially on the long straights, but we just couldn’t get it to the end of races with new-car gremlins – thankfully, that seems to be behind us now hopefully.

“While we came home with four race finishes and race results of fourth, fifth, fourth and second; tyres were a real issue all weekend not only for us but for a lot of the field – however we seemed to be the worst effected with three flats from four races. Who knows what could have been if we hadn’t been so affected in that way.

“We wouldn’t give up though and we are very happy with the way we ended our weekend with a solid second place in the race and third overall for the round – it is a great step forward for what is a very hard-working group of people.”

To avoid the tyre dramas which plagued them in races one to three, a raft of set-up changes were made to the #18 heading into race four, explains driver Iain Sherrin.

“Race four was much better for us as far as tyre wear, but all of the changes we made to accommodate the tyre degradation did see us compromise somewhat on the set-up of the car and it was quite ‘skatey’ as a result,” Iain said.

“We knew it would be like that when we headed out and we just drove to accommodate that as much as we could. The good thing is that now, with the new car gremlins seemingly sorted, we can put all our efforts into getting that set-up right to make for a more enjoyable drive at future events now.”

In the #19, family patriarch Michael Sherrin was joined in the driving duties by family friend Stephen Champion – who was experiencing his first ever production car races this weekend in what was only his second ever race meeting.

The pair came home with two class race wins and missed out on taking the win for the class overall for the weekend by only one point.

“Stephen did a fantastic job at the wheel of the #19 all weekend long, especially when you consider the fact that this is all so new to him,” Michael Sherrin said.

“The whole team put in a fantastic effort for both cars all weekend long, and while I am sorry we missed out by ‘that much’ on the Class B1 round win, I am still ecstatic with the results that we were able to achieve.

“Two race class wins for the #19 and personal-best results for the #18 after the hard-fought battle of the first half of the season is so very rewarding, and I can’t thank all the guys in the crew enough for all of their hard work this year. I can’t wait to see what we can do at our home track in Queensland in a month’s time!”

When it came to Champion, to know how he felt about the weekend one only had to take a look at the huge grin on his face following the final race.

“It has been a great weekend – it was my first production car race and my second race event ever, and it is safe to say that it was just fantastic,” Champion said.

“The team was fantastic and a great support and I had a great time driving with Mike. Overall, it was just awesome – the more miles I got, the better I felt, and I set my fastest time in the last race. I really enjoyed the whole weekend, and hopefully I can come back again in the future!”

Sherrin Racing will next be on-track with the Australian Production Cars at Queensland Raceway across August 4-6, for what will be the fourth of six rounds for the 2017 Series.