While Joel Berkley’s introduction to the Production Sedan class hasn’t been the smoothest ride, it’s one that has now led him to the greatest achievement of his career: a National Production Sedan Title victory. 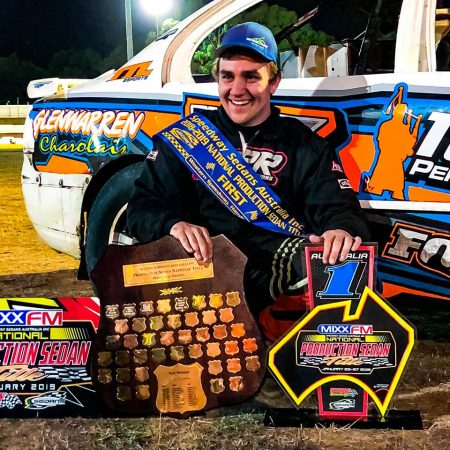 Racing Junior Sedans for eight seasons, which were highlighted by a top-five Queensland Title result on home soil at Maryborough Speedway, Berkley’s transition into senior competition was an interesting one, with the 19-year-old racer accepting an offer to swap his Datsun Sunny Junior Sedan for a BA Ford Falcon, which was originally run as a Modified Sedan.

Converting it to a Production Sedan prior to the beginning of the 2017-18 season, Berkley’s debut with the class wasn’t quite what he’d expected, experiencing a myriad of mechanical issues which resulted in a multiple DNFs. However, his challenging maiden season wasn’t without promise.

Finishing just three of around 18 contested race meetings, Berkley proved that when he could reach the finish line, he was a formidable contender, winning a round of the Ian Boettcher Race Parts Super Series at Maryborough Speedway, along with taking out a feature-race win at Rockhampton’s Rocky Speedway and placing inside the top 10 of the Harbour City Hustle at Sydney’s Valvoline Raceway (NSW).

It was following last season’s National Title at his home track that Berkley and his dad decided it was time to give the car an overhaul, after Berkley qualified fourth for the feature race and had made his way up to third when he suffered steering problems, which ultimately dashed his hopes.

Essentially stripping the car and going over it with a fine tooth comb, the hard work and hours in the shed well and truly paid off for Berkley, with the Maryborough, Queensland-based driver hitting the ground running this season, racking up a whopping seven feature-race wins, including two apiece at Toowoomba’s Hi-Tec Oils Speedway, Gympie’s Mothar Mountain Speedway and Kingaroy Speedway, along with one at Rocky Speedway.

With added confidence due to his recent string of victories, Berkley decided to make the long 22-hour trek from his home to Hamilton’s Western Speedway in country Victoria to try his hand at the National Title for the second time running, hoping this time to greet the chequered flag.

Despite being unfamiliar with the track, Berkley was a model of consistency from the outset, placing second in practice, before closing night one equal highest in points, by virtue of finishing first, second and third in his heat races.

Winning his fourth and final heat race on night two, Berkley’s efforts throughout qualifying were enough to earn him the pole position start for the National Title-deciding feature race. Knowing that the key would be to set the pace early, that’s exactly what Berkley did, immediately taking control of the lead and looking after his tyres throughout the 40-lap distance to claim and impressive win.

“To win the National Title in only my second season with the class is a massive accomplishment and I’m still slightly in shock that we were able to get it done,” expressed Berkley, who was especially pleased to have been able to see this National Title through to completion following last season’s efforts.

“I was a bit nervous heading into the title, particularly after last season, but I had a lot of confidence in the car and it hasn’t missed a beat this season.”

Berkley’s National Title campaign wouldn’t have been possible without the support of the three sponsors who came on board to make the trip to Hamilton a possibility.

“I can’t thank Tullboro Performance Products, Glenwarren Charolais, and Jayden Nelson Car Detailing enough for getting behind me for the National Title and making it possible for me to travel to Victoria and participate,” he added.

“I also have to say a big thanks to all of my existing sponsors who continue to support me, along with my family and crew, who make it all worthwhile.”

Focusing on completing the IBRP Super Series, where he’s currently sitting second in points, the next major event for Berkley will be the Queensland Title on April 13 at Maryborough Speedway. While past performances at the track haven’t been the best for Berkley, he’s hoping to break the drought during the title.

Berkley is currently looking for an opportunity to guest drive in the Western Australian Title at Ellenbrook Speedway from April 19 to 21. He may also participate in the NSW Title at Moruya’s Surfair Speedway later in the season, but that is all going to depend on sponsorship dollars.

In addition to Tullboro Performance Products, Glenwarren Charolais, and Jayden Nelson Car Detailing, Berkley would like to thank is regular 2018-19 season sponsors for their continued support: Down Under Graphics, Advance Tyres, Fox Shock Lab Australia, and Motorsport Promotions.

Special thanks go to his mum and dad (Rose and Scott), pit crew member Michael, the Atkins family for their hospitality throughout the National Title, with Berkley being based out of their workshop, and Shona Bent and her family.