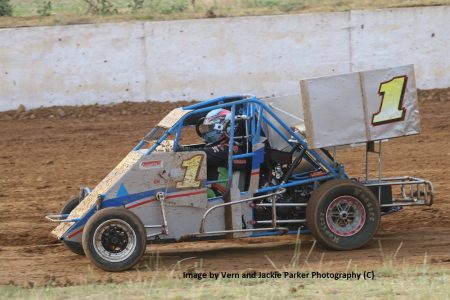 Rushworth Speedway fires up the octane action this Saturday night, the first event since the Christmas break and a terrific line up has nominated for the Paul Benton Memorial for the combined field of Goulburn Valley Open and Production Sedans as they share top billing with the Grand Prix Midget Rod Quarrell Memorial which doubles as the Victorian title for the class.

The visiting 3 Litre Sedans along with the local Ladies and the Juniors are also on the terrific night of racing.

Entrants in the Super Balance Automotive supported Victorian title for Grand Prix Midgets include Australian champion Trevor Perry whose family has a long history with the Goulburn Valley based club as does multiple times state champion Dennis Myers who is also in the field. Perry is yet to win a Victorian title whilst Myers almost has more Vic title wins than he does fingers on his hands!

These two competitors are very fierce on track and love to win at Rushworth however the likes of Lisa Chalcraft the fast femme and another Goulburn Valley local, Travis Florrimell, Chris Fowler, Janelle and Rod Saville and last event winner Shawn Ward are all primed to give a good account of themselves at the title.

The Mota Care Service Centre supported Benton Memorial pits Open Saloons up against the Production Sedans and leading the fancied runners from the Open Saloons is Paul Lamb. He will have his work cut out for him with Michael Wicks, Jay Nicolaisen and Garry Gapes who won the last race meeting for Open Saloons amongst those putting up a challenge.

3 Litre Sedans visit again and Goulburn Valley racer Daniel Wilson will be keen to win on his home track however he is going to have a challenge on his hands with Lennie Clark, Mick Boyle and Andrew Ahearn amongst the entry list. Clark has a great history of winning at Rushworth and he is coming off a victory at Swan Hill and is in winning form. Locals will be cheering on Wilson to a home track win.

Again action in the Ladies will be tough with the likes of Chloe and Kelly Lamb, Cassie Wicks, Belinda Chalcraft and the Hodge girls in the line up whilst in the Junior Sedans Lachie Fitzpatrick has been winning races away from Rushworth and he again is the favourite with Tristan McGraw and the Cecil boys keeping him honest.