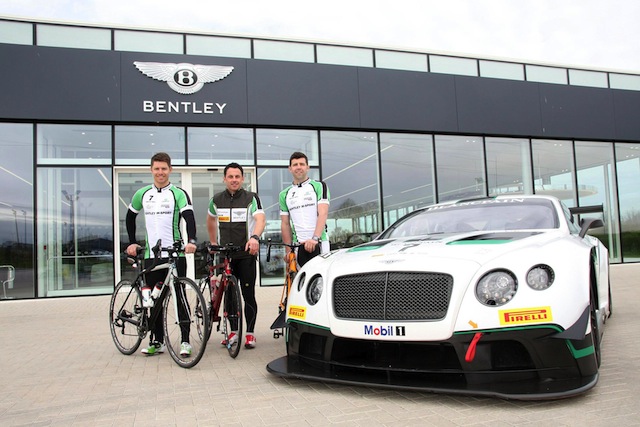 Bentley Boys Guy Smith, Andy Meyrick and Steven Kane are undertaking the team’s second 12-hour challenge of the 2015 motor racing season – only this time they are relying on pedal rather than horsepower.

On May 1st the Bentley Team M-Sport car #7 drivers will set off on an epic 170-mile charity bike ride.

The route will see them pedal north through Cheshire, onwards into Lancashire, through the mountainous Lake District and on to Cockermouth, Cumbria, all in a bid to raise funds for Care2Save – the palliative care charity.

Commencing at 5am, the journey begins at the home of Bentley in Crewe where Bentley Motorsport is based.

The route culminates at M-Sport headquarters in Cockermouth, Cumbria, where the Continental GT3 cars are race prepared.

With an expected 5pm finish, the 12-hour ride will form a key part of the team’s physical training regime.

Created by the fundraising team at St Luke’s Hospice, Cheshire, Care2Save provides funds to improve hospice and palliative care around the world.

Andrea Fragata Ladeira, CEO of Care2Save, said: “Bentley has supported St Luke’s Hospice for many years. The hospice has in turn offered support to Bentley staff and their families at very difficult times.

“Care2Save allows us to work in partnership not only to ensure St Luke’s has a stable future but to develop excellence in palliative care beyond our locality in the wider world.”

Le Mans-winning Bentley Boy, Guy Smith, added: “Training together forms an integral part of our preparation for the racing season, both physically and mentally.

“The race from Bentley’s home in Cheshire to M-Sport in Cumbria seemed an apt way to incorporate training while supporting a worthwhile local cause, Care2Save.”

To sponsor the Bentley Boys and help Care2Save with their remarkable work, please visit www.justgiving.com/BentleyBoys/ and make a donation.

The 2015 season sees the continued growth of the Bentley international motorsport programme, with Works-supported teams racing in six different series across four continents and customers taking their Continental GT3s to an ever-expanding selection of new countries and GT races.

Having already achieved a fourth place finish in February at the Bathurst 12-Hour, the next challenge for the Bentley team is arguably the world’s most gruelling endurance race – the ADAC Zurich 24h Race at the Nürburgring.

The year will close in December with one final endurance race, the Gulf 12 Hours at the Yas Marina circuit in Abu Dhabi.