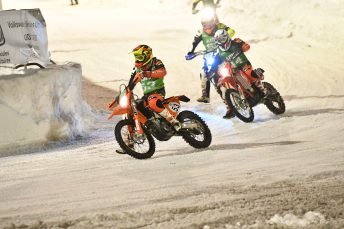 Benoit Treluyer took to two wheels at the Andros Trophy

MEDIA RELEASE: Benoît Tréluyer found much more than what he was looking for in the Andros Trophy! Apart from the pure pleasure of driving, which he had almost forgotten, he also joined a new family, the Belgian Audi Club Team WRT. As his future is leaning more towards GT racing, Benoît heads into the 2017 season fully recharged.

Benoît heaped praise on the Andros Trophy and had a lot to say about his first complete campaign in it. “It went too quickly,” he said, barely catching his breath. “A full season within two months, everything happens so fast that there was barely time to look back on the highs and lows before you were getting ready for the next race, I just loved it.

“The Trophy is well managed and those who don’t follow the series’ gentlemen agreements and tacit rules are not welcome. Max (Mamers) is in charge of everything and is very passionate about taking any necessary actions to improve the spectacle. I like his spirit and dedication. Sometimes, I thought he should take a more pragmatic approach like we do at Audi, but that would remove the charm and character of the series.”

The Andros paddock is like no other, with a friendly atmosphere in which the Frenchman not only received a warm welcome, but also found a new home in WRT.

“Since 2003 I have been working for a manufacturer and driving is part of a bigger job,” he added. “There are countless briefings, debriefings, reports to write and people to inform. There’s a lot of work going on outside the cockpit and we sometimes forget about the real essence of the sport. With WRT, they have managed to reconcile extreme professionalism and complete coolness. The cars are fantastically well prepared and they are always focused on the job at hand. I had a great time at NISMO in Super GT and with Audi in LMP1, but you had that working side which sometimes cancelled out all of the fun. During the Trophy, I only did what I enjoyed doing and because of this experience, I am fully recharged for the season ahead!”

Benoît loved discovering a completely new world, with different rules, tips and techniques, as well as enjoying a great atmosphere and competitive spirit.

“By the end of the season, I would’ve liked to have performed better,” he admitted. “I was quite optimistic at the beginning as I knew I had a large progression margin. Unfortunately, what I did not anticipate is that very experienced drivers are untouchable once they are back up to speed during the first couple of rounds.

“In fact, this year, I needed the opening weekend to adapt and the second to start performing. The standard is very high and if I was able to make the top six, I was still unable to challenge Jean-Baptiste) Dubourg, (Jean-Phillippe) Dayraut, (Olivier) Panis, (Benjamin) Rivière or (Franck) Lagorce. Even if one or two weren’t having a good weekend, there was still at least three that were right up there.

“Nevertheless, with Olivier we secured the Teams’ title for WRT. It was also great to see Nathanaël (Berthon) win the ‘Elite’ class in only his first season and – with Bérénice (Demoustier) – we made a fantastic team and had a really good time!”

There was even more for Benoît to enjoy during the Super Besse final, in which the Audi driver made his debut in the AMV Cup on a KTM bike.

“I did it for fun, but was instantly hooked,” he laughed. “During the first final, I was on the pace without going all out, so I decided to attack a bit more during the Super Finale. However, I got a bit overconfident and lost the front-end. It took time to get the bike up and by the time I restarted I was last, but managed to climb back to 11th.

“I really enjoyed myself and the icing on the cake is that I set competitive lap times. I am extremely happy, as my KTM 350 EXC-F was standard unlike those around me. I just followed the advice given by  ‘4.42’, the race-prep company based in Aix-en-Provence, who sent me the basic suspension settings in order to have a bike with better grip. If I do it again next year, I will try to race-prepare the bike.

“I’d like to give a big thank you to (Kévin) Duvert who fitted my tyres, to the Daberts who fitted the kill switch, and all the other riders, whom I would’ve liked to have spent more time with.”

Next year Benoît may well still get that opportunity, as the ex-bike racer is set to return to the series. For now though, the Andros Trophy is over, so the focus is now on GT racing and potentially some Rallycross.

“I want to continue circuit racing and I would like to share my experience with other drivers,” he explained. “I also want to show that I can do much better than during the 2014 Spa 24 Hours, where I was not happy with my performance. I can be amongst the best in GT, as I was in Japan. Rallycross is also on my radar, but this is not easy as the category is becoming very expensive and it’s not really my background.

“Then there is the 24 Hours of Le Mans, which I should be attending, either as a driver or a spectator, but I’m still unsure. I always follow my heart, if a great opportunity presents itself with an interesting challenge, I will be tempted. At the same time, if there are no good opportunities, I won’t push for it. In fact, this season I am going to be a Jack-of-all-trades. There is work to do with Audi, but I will try plenty of other things.”

Benoît will unveil his 2017 programme at the end of February. Stay tuned.