The Bend surpasses the rider’s expectations as Maxwell goes quickest

The Bend surpasses the rider’s expectations as Maxwell goes quickest 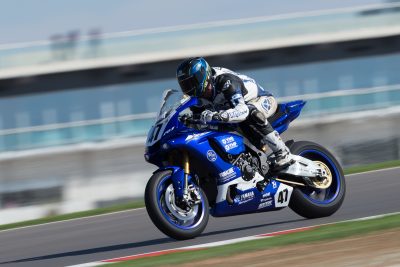 The Official ASBK Test at The Bend Motorsport Park is now in the books and it was Wayne Maxwell (Yamaha Racing Team, YZF-R1M) to set the benchmark. Conditions were excellent at the brand-new track and the riders were full of praise for the world class facility and layout. Attention now turns to Round 3 of the Yamaha Motor Finance Australian Superbike Championship presented by Motul Pirelli (April 19-22) joined by the FIM Asian Road Racing Championship.

The last session for the day was full of excitement, as Maxwell flew to the top of the timesheets. Maxwell set his fastest lap in the dying seconds of the Official ASBK Test.

Maxwell saying; “It was a very successful test and there’s a lot of guys towards the front. We know we’ll have to watch out for the guys behind us. Looking forward to coming back to The Bend for Round 3.”

Second to Maxwell was Troy Herfoss (Penrite Honda Racing, Honda CBR1000SP). Herfoss set the fastest time yesterday but was just pipped to the line by his rival Maxwell. Incredibly, only 0.010 of a second separated the two.

In third position was three time WorldSBK Champion Troy Bayliss (Desmosport Ducati, Ducati 1299 Panigale FE). The Ducati looks at home at The Bend Motorsport Park and Round 3 could perhaps see a Bayliss victory, should the cards fall in his favor. Bayliss was a further 0.26 behind the fastest time of the day.

Also finishing in the top five was the reigning champion, Josh Waters (Team Suzuki ECSTAR, GSXR-R1000R) and multiple Champion Glenn Allerton (NextGen Motorsports, BMW S1000RR) who is looking strong again and appears to be recovering well after a significant fall at Round 1.

It’s all setup for a brilliant YMI Superbike battle when ASBK returns to the Bend!

Fastest was Cru Halliday (Yamaha Racing Team, YZF-R6) who was without a doubt the strongest rider in his class. As the test progressed, Halliday become very comfortable with the layout of the track.

In second was the championship leader Tom Toparis (Cube Racing, Kawasaki, ZX-6R). The gap to Halliday was significant, as much as 1.785s. Toparis will be looking to take the fight to his title rival at Round 3.

Giuseppe Scarcella (Kawasaki BCperformance, ZX-6R) managed to place himself in third. He will be seeking to elevate himself onto the podium for race weekend. He was a further 2.213s off the leading pace.

Putting in a scintillating lap on his Yamaha was Hunter Ford (South Sydney Commercial, Yamaha YZF-R3). Despite not taking part in the final session, Ford’s fastest lap from the third session of the day was enough to secure top spot. Topping the test will be a huge boost to Ford, who currently resides sixth in the championship.

Coming in second was the Olly Simpson (Simpson Crash, Yamaha YZF-R3), who was one of the highlights of the Official ASBK Test. Simpson, a former Red Bull Rookies Cup rider was fastest yesterday and is planning to compete at Round 3. The difference between the top two was 0.117s.

Tayla Relph (Yamaha YZF-R3) was also one of the big improvers over the two days. After sustaining an injury at Round 1, Relph has been in a strong run of form. It will be fascinating to see she can contend for the podium come race weekend. Relph finished a further 0.474 off Ford.

ASBK will return to the track for a motorcycle spectacular with the FIM Asia Road Racing Championship (ARRC) 19-22 April. The best riders from Australia and Asia will be burning rubber, it won’t be one to missed!