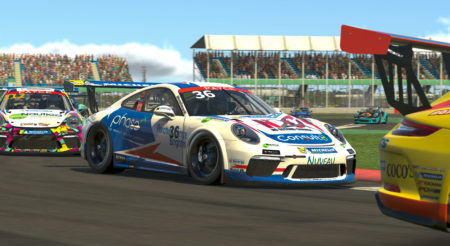 After claiming nine race victories, and an enviable average finishing position of second, Cooper Murray, had a comparatively eventful round – by his lofty standards – finishing off the Silverstone podium in the final three sprint races of the inaugural Porsche PAYCE and MICHELIN Virtual Cup Championship.

Fortunately for the Melbourne based McElrea Racing pilot, he had already sealed the Mobil Pro Championship after Round 5 in convincing style, leaving the Silverstone event to decide the minor placings and crown a Champion in the Pro-Am class.

The New Zealand driver was never challenged throughout the Silverstone round, his efforts netting him the runner-up position in the overall Championship – overtaking reigning Porsche Michelin Sprint Challenge Champion, Harri Jones, in the final standings. Jones who would end up just 16-points behind Payne, marking a strong result for the McElrea Racing squad.

With six drivers still in with a mathematical chance of taking the Pro-Am class championship heading into the final round, all eyes were on the mid-field battle in the 32-car strong field.

After a strong showing in round 5, Marc Cini, again used all of his Porsche experience to control the class taking victory in the evening’s first two races, while Sonic Motor Racing’s Graham Williams would take the flag in the season’s final race.

But it was the consistency and pace of Cini’s Porsche Centre Melbourne teammate, Matthew Belford, who would retain his Championship lead heading into the final round and emerge victorious thanks to two strong podium performances in races 1 and 2.

Despite his late-race victory, Williams couldn’t defend his second place in the Pro-Am Championship from Sergio Pires, who would finish ahead of the Melbourne driver by a margin of 40-points.

All three races from Round 5 in Silverstone will be shown on the @PorscheMotorsportAU Youtube channel at 20:00 (Melbourne time) on Friday evening.