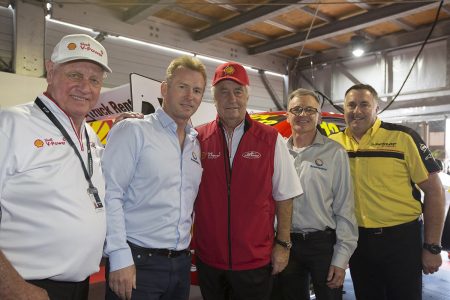 Beaurepaires is a part of Goodyear and Dunlop Tyres Australia, with a retail network of 230 stores nationally, employing approximately 1,000 staff.

The famous Beaurepaires logo will appear on the lower rear quarter panel of both Shell V-Power Ford Mustangs at all 15 events in 2019 and beyond. The logo made its first appearance on the cars at the Newcastle 500 this past weekend, where Scott McLaughlin won the 2018 Supercars title.

Tony Kiernan, Senior Brand Manager from Goodyear & Dunlop Tyres Australia, said that it was very exciting to be involved with a Championship winning Supercars team such as the Shell V-Power Racing Team.

“Goodyear and Dunlop Tyres has shared some incredible successes with the Shell V-Power Racing Team over several decades, so we’re very proud to be back in the fold,” said Kiernan.

Rob Lewis, Vice President Retail of Goodyear & Dunlop Tyres acknowledges the value and importance of this partnership for Beaurepaires.

“Being able to promote our Beaurepaires retail network to this engaged, captive audience is a fantastic opportunity, and we look forward to leveraging the power of this partnership in the coming years.”

Dick Johnson, co-owner of the Shell V-Power Racing Team, said he was pleased to see Goodyear and Dunlop Tyres return as a partner of the team.

“Our association with Goodyear and Dunlop Tyres goes back a long way, so to be renewing our partnership again via Beaurepaires feels in many ways like we’re getting the band back together,” said Johnson.

“Beaurepaires is a renowned brand in Australia, and Sir Frank Beaurepaire was an icon of the industry. Having his name on our cars is an honour. We aim to do the name proud.”