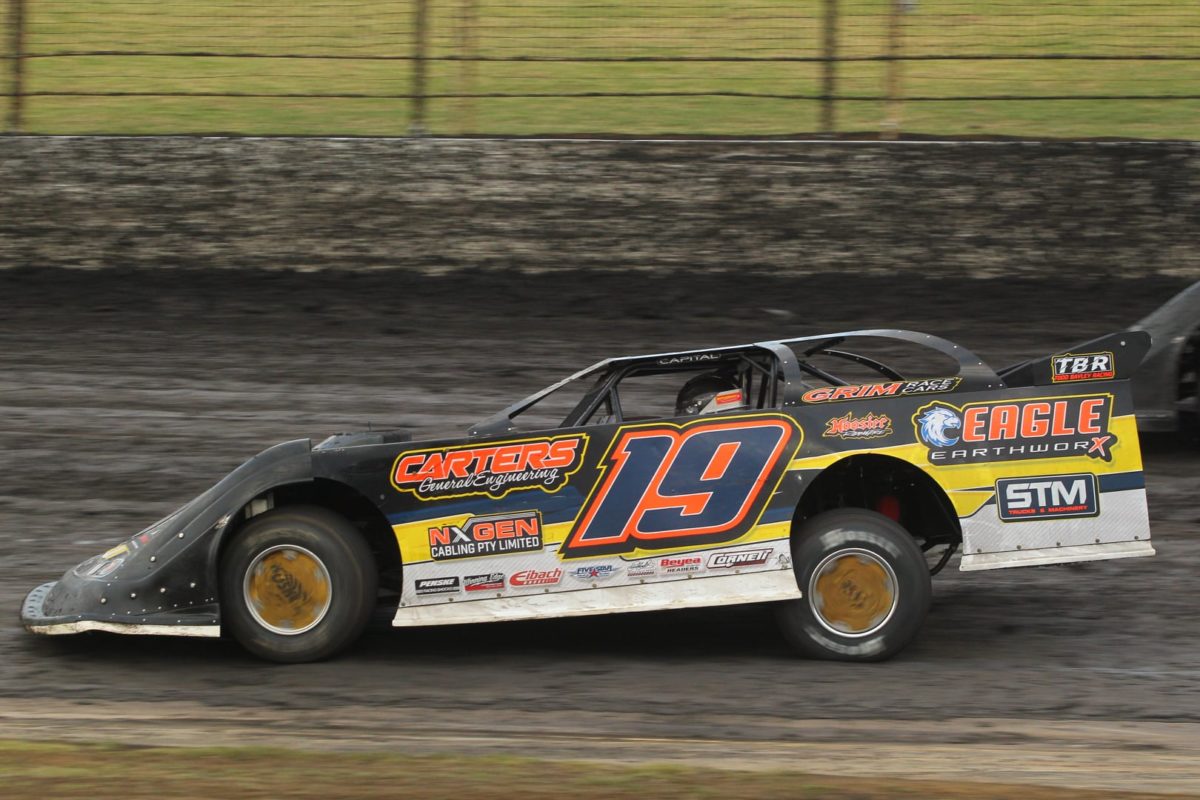 Warrnambool’s Premier Speedway is regarded as one of country’s leading speedway tracks, and Todd Bayley managed to make it his own over the weekend in the Late Models after he claimed both feature-race wins.

With only one race meeting to his name so far in the 2021-22 season, Bayley, from Bensville on the Central Coast of NSW, made the trek down to the south-western Victorian track aboard his brand-new Capital Race Cars machine, and he certainly made it a memorable weekend.

After taking out the feature-race honours late last month in his home state of NSW at Gilgandra Speedway, the current Victorian Champion was able to take out both feature races on Friday and Saturday night at Premier Speedway in impressive fashion. In Friday night’s action, Bayley had qualified on pole position for the feature race by virtue of finishing third in his opening heat race and winning his other heat race. To say that he had to fight hard for his feature race win throughout the 20-lap event would be quite the understatement, as he battled with former Australian Champion Callum Harper in lapped traffic, but he managed to lead the entire distance and claim the win.

With his confidence sky high after the previous night’s win, Bayley was focused on backing up that performance the following night. He certainly did that, he was once again the highest point scorer from the heat-race action after he had finished first in his opening heat race and then second in the final heat race. Opting to start the feature race from the outside of the front row, he went on to make every post a winner over the 20-lap journey and scored a comfortable win.

“I couldn’t have asked for a better weekend, as my team did a great job all weekend and my brand-new Capital Race Cars machine was on point straight out of the box from the guys at Capital,” expressed the NSW # 19 Sydney Truck & Machinery / Wesco Industries supported Capital Race Cars driver.

“Last weekend was meant to be the postponed 2022 Australian Title at Premier Speedway, but we still headed down for this two-night event to get some more laps under our belt and adjust to the new car’s handling, and we managed to do that in the best possible fashion.

“None of my success wouldn’t have been possible without all of my wonderful sponsors, as well as the ongoing support and advice I receive from the team at Capital Race Cars over in America, and Darryl Grimson at Grim Race Cars for all of his help with our engine, which hasn’t missed a beat.”

Looking ahead to the rest of the 2021-22 season, Bayley has plenty of racing left to do, which includes this Friday and Saturday night’s South Australian Title at Murray Bridge Speedway. After that, he will return to competing in his home state to compete on March 12 at Dubbo’s Morris Park Speedway and then on March 19 for his first appearance at the brand-new Eastern Creek Speedway. Also, next month, Bayley is going to be defending his Victorian Title on the Sunday night of April 24 at Hamilton’s Western Speedway.

“The rest of this season’s schedule is pretty full as there is still a lot of racing on offer, so I’m just hoping to do as much racing as possible and in the process try and add to this season’s feature-race winning tally,” concluded an enthusiastic Bayley.

Todd Bayley is proudly supported in the 2021-22 season by:

To keep up to date with Todd Bayley’s racing activities, LIKE him on Facebook by searching Todd Bayley Racing.