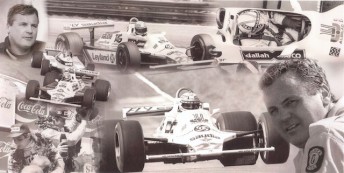 Alan Jones is one of only two Australians to have won the Formula One motor racing World Championships.

Bausele’s ChronoS collection is the ultimate statement piece with cutting edge unisex design and durable quality; a one of a kind watch that looks great on any wrist.

The Swiss made, Australian Designed watch exudes sophistication with a sporty edge thanks to bold lines and with advanced chronograph functions, the ChronoS series has a sleek design suitable for any adventure that’s uniquely Australian.

The sporty edgy design and features resonate with Alan and his adventurous lifestyle as a successful racing driver and will feature his personal signature on the back casting/face of the timepiece allowing the wearer to show their support for Alan Jones wherever they may go.

Alan Jones is a world-renowned motor racing identity and Australian Legend. Alan won the Formula One championships in 1980 – making him one of only two Australians to have ever won. Alan has also won an impressive 12 Grand Prix from 116 starts.

His Formula One career spanned from 1975 to 1986 and his final grand prix appearance was in Adelaide, Australia.

Outside Formula One racing, Alan has proven to be a versatile performer in a variety of racing formulae and has excelled in television commentating and also as an inspiring speaker.

With the backing and support of Bausele Australia, Alan Jones has a very exciting couple of months coming up and is heading to the United Kingdom at the end of the month to receive the prestigious motorsport award from the Founder of Auto Sport.