Australian born and raised in Cooma, New South Wales, Christopher embodies the Bausele spirit with his adventurous lifestyle. Christopher has collaborated with Bausele’s Australian watchmaker designers to create a sophisticated Limited Edition Watch in commemoration of his successful 2015 debut on the European motor racing scene. 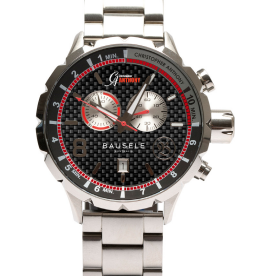 Christopher’s customised Bausele timepiece features his distinctive logo on the dial of the watch and his personal signature on the back casting, allowing the wearer to show their support for Christopher Anthony wherever life takes them.

Uniquely, each timepiece contains a little of Christopher Anthony’s racing DNA in its crown – a small piece of rubber taken from one of the actual tyres of the car which Christopher drove to victory in the 2013 New South Wales Formula Ford Championship.

In choosing this Bausele watch design, Christopher Anthony said: ‘Because when racing cars or taking the time, precision means everything.’

Like Bausele’s beginnings, Christopher’s successful racing career began in Australia, competing in various state and national championships from a young age. The highlight of Christopher Anthony’s career to date was in 2014 when he won two Formula Three races on the Mount Panorama circuit at Bathurst, Australia – and became the youngest-ever outright lap record holder at this notorious track. In August 2015 Christopher made his first international racing appearance in front of a massive 100,000 crowd at Assen in the Netherlands. In September he raced on the famous Nurburgring in Germany and his last 2015 European race was at none other than Le Mans, in France, where the ‘24 Heures du Mans’ is held annually in June.

To commemorate this successful debut on the European motor racing scene, Christopher has partnered with Bausele Australia to create his Limited Edition timepiece.

Now, with the backing and support of Bausele Australia, Christopher Anthony is planning his next step-up on the international motor racing ladder in the upcoming 2016 season.

There will be just 50 of Christopher’s Limited Edition watches – available at $990 each – featuring his distinctive logo and signature; a truly Australian-inspired timepiece.