A small rock through the radiator was all it took to end a Bathurst-winning dream for Kenny Habul and his SunEnergy1 team at the Liqui-Moly 12-hour at Mt Panorama today. 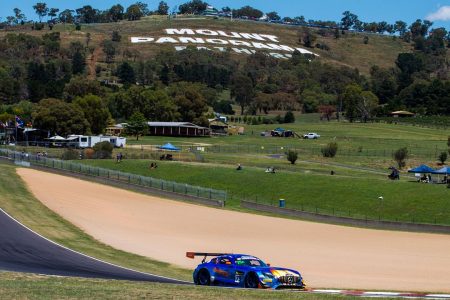 A dominant leader in the Pro-Am class, the Mercedes-AMG GT3 of Habal, Thomas Jaeger and Dominik Bauman was comfortably running as high as third outright and in a position to challenge for a race victory when a rock pierced its radiator and caused a terminal overheating issue.

Despite efforts to solve the problem, #75 entry was officially withdrawn after lap 202 with just over four hours remaining in the event.

Jaeger started the race after qualifying the car in 20th and handed over to Habul who drove an impressive double stint taking the car from 25th to ninth.

Baumann, having his first start at Mt Panorama then contributed before handing back to Habul who drove another terrific stint that saw the car running inside the top 10 outright.

The car was prepared by Scott Taylor Motorsports which also prepared a car for David Reynolds, Luke Youlden and Yasser Shahin which incredibly suffered similar radiator damage on lap 156 at about half race distance.

The third car in the STM stable of Jamie Whincup, Craig Lowndes and Shane van Gisbergen finished in fourth place.

The race was won by the Porsche of Matt Campbell, Dirk Werner and Dennis Olsen.

It was a shattering end to what had been a tremendously positive day for Habul who finished second outright in last year’s race in a Mercedes-AMG he shared with Tristan Vautier, Whincup and Raffaele Marciello.

Habul now heads to the California 8 Hours at Laguna Seca on March 30, the Total 24 hours of Spa on July 27-28, the Suzuka 10 Hour on August 25 and the new Kyalami 9 Hour in South Africa on November 3.

WHAT KENNY HAD TO SAY……

“Motor racing can be a cruel sport,” said Habul.

“The team did a solid job, AMG were great and my teammates drove well enough to give us a shot, but at the end of the day the racing gods were not on our side.

“I was happy with the way I drove. We kept coming in and topping up the tank and despite the fact that the changing fuel load changed the handling I managed to keep it off the walls.

“Obviously this is not how I wanted to start the defence of my driver’s championship, but we live to fight another day.

“We will now re-group for the next round of the Intercontinental GT Challenge at Laguna Seca and put ourselves back in the fight.”