Bathurst champ in action at Archerfield

Bathurst champ in action at Archerfield 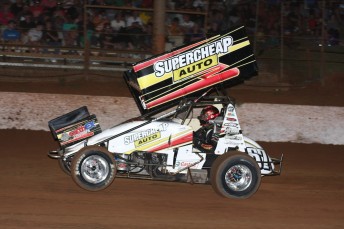 Paul Morris in action in his sprintcar. pic: J&C Carrell

Having beaten the best in V8 Supercars to win the 2014 Supercheap Auto Bathurst 1000 in October, Paul Morris will take on some of the very best dirt track racers in the country this Saturday night (November 30) when he contests round five of the Supercheap Auto Sprintcar Track Championship at Ausdeck Patios Archerfield Speedway.

An avowed fan of the excitement that Sprintcars can deliver – both for competitors and spectators – Morris has been a regular competitor in the category for several seasons.

However, never before has the Gold Coast-based racer launched into a speedway season as the reigning Bathurst champion amid the air of expectation that such a success invariably brings.

However, Morris isn’t the only driver hitting the track in readiness for the big international season that is almost upon us as there are 30 drivers nominated for this weekend’s event, including last round winner Peter Lack, Queensland champion Robbie Farr and series point leader Andrew Scheuerle.

Lack was faultless in taking out round four a fortnight ago, while Farr is always a contender at Archerfield and enjoys a terrific record of success at venues across the country.

Whilst yet to win a series round so far this season, Scheuerle did take out the feature race at Maryborough last weekend and will be looking to replicate that form this Saturday night in an effort to stave off the formidable challenge being presented by Luke Oldfield in the battle for track championship honours.

Oldfield has been in terrific form thus far this season and Scheuerle knows that only a repeat of his Maryborough success can offer any guarantee with regard to maintaining a narrow points advantage over his prodigious rival.

All the leading drivers in the championship standings have nominated for this event, which is one of only two remaining opportunities for drivers to hit the track in preparation for the arrival of American superstar Donny Schatz next month.

The likes of Bryan Mann, Brent Kratzmann, Jamie Bricknell, Kevin Titman and Terry Bracken will be in the thick of the action, with Cairns veteran Mike Walsh a welcome addition to the field.

There are 17 nominations for this event with Charlie Brown, Cody Maroske, Ryan Skennar, Kaydon Iverson and Kristin Brown the most likely to end Shilleto’s remarkable run.

On an exclusively open wheel night of competition, Queensland champion Scott Genrich leads a solid field of Lighting Sprints into battle, with Compact Speedcars and Wingless Sprints also on the program.